Anderson, Weaver and Ortiz Are In 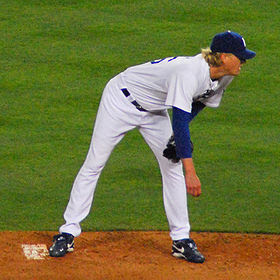 After the Dodgers loss to the Angels Friday night, Joe Torre announced a few unofficial roster moves. He said Garret Anderson, Jeff Weaver and Ramon Ortiz had all made the team. An official announcement will be made Saturday.

Anderson will be the main left-handed bat off the bench. Ortiz and Weaver will start the season in the bullpen.

The moves mean that right-handers Carlos Monasterios and Russ Ortiz and shortstop Nick Green will be fighting for the last two roster spots.

Also, INF Doug Mientkiewicz was released by the Dodgers, and RHP Luis Ayala and C J.D. Closser were reassigned to their Triple-A Albuquerque club. OF Jason Repko and LHP Eric Stults cleared waivers. Stults was officially sold to the Hiroshima Carp
Share |
Posted by Dodgerbobble at 11:16 PM