Bobblehead Of The Day: Joe Torre 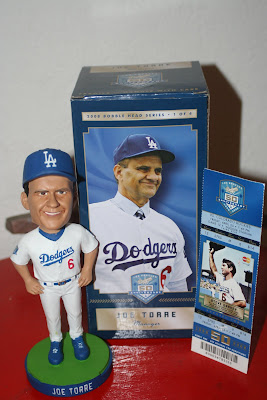 The Dodgers are on their way to New York, Joe Torre's hometown. The city where he won his four World Series rings. So I thought we'd take a look at Joe Torre's 2008 Dodger Stadium Exclusive Bobblehead.

On Friday, April 25, 2008, the Dodgers gave away Joe Torre Bobbleheads to the first 50,000 fans in attendance. Made by P Squared Promotions, this bobble was the first of 4 given away by the Dodgers that season. The other three were Takashi Saito, Brad Penny and Joe Beimel. It's funny, all three of them play somewhere else now. The Dodgers played the Colorado Rockies that night, and won 8-7 in 13 innings. Chan Ho Park was the winning pitcher, Taylor Buchholz took the loss. 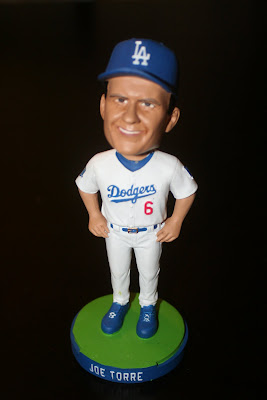 One side of the box gives Torre's managerial record from 1996 to 2007. The other side gives some facts about Joe. It's a decent looking bobblehead in a weak crop of four that were given out during a special year for the Dodgers, their 50th season in Los Angeles.
Share |
Posted by Dodgerbobble at 8:10 PM