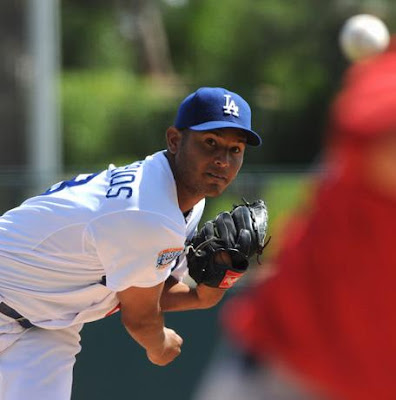 Carlos Monasterios will be making his first career start Saturday against the Pittsburgh Pirates, tweets DodgertownUSA.

Coming out of the bullpen, Monasterios has been invovled in 7 games. He's pitched 10.2 innings and has an era of 1.69.

Joe Torre had other options. Hiroki Kuroda is scheduled to pitch Sunday. Joe Torre said he wouldn't move Kuroda to Saturday because that would only give him three days rest, after starting Tuesday. Charlie Haeger was another option, but he pitched Tuesday as well, and that would mean only three days rest for the knuckleballer.

Carlos Monasterios has really only been in non-pressure situations so far this year. Like John Ely earlier this week, Monasterios will be thrown into the fire. It's time to see what this kid's got.
Share |
Posted by Dodgerbobble at 7:24 PM