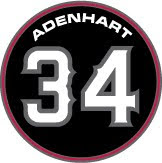 Today is the 1 year anninversary of Anaheim Angels pitcher Nick Adenhart's death. Adenhart pitched his first game of the season that day, shutting out the Athletics across six brilliant innings at Angel Stadium. Just three hours later, he was gone. A vehicle driven by a man, who would later be charged with triple-murder, had crashed into the one occupied by Adenhart and three of his friends. Courtney Stewart and Nick Pearson died alongside Adenhart. The fourth passenger in the car, Jon Wilhite, remarkably survived.

Hundreds of flowers,pictures, signs, hats and other items were left at a fan-made memorial after his death. That stuff is all gone now, stored away for the Adenhart fanily. There was also a black and white banner of Adenhart in centerfield. That has been removed too. The team decided it would be best to move on this season without all those reminders, but Adenhart will remain in everyone's heart and minds.
Share |
Posted by Dodgerbobble at 5:41 AM