Roberto over at Vin Scully Is My Homeboy had a contest earlier in the week. He gave away an Andre Ethier bobblehead to the first person to e-mail him a picture of themselves wearing a VSIMH shirt. I thought it was a great idea.

Congrats to Mike Brown from The Left Field Pavilion. His Casey Blake "In Beard We Trust" shirts are real hot right now. Matt Kemp's wearing the shirt, and it was shown by Steve Lyons on Dodgers Live. 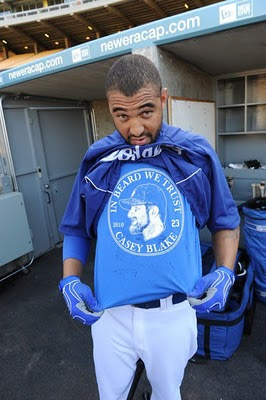 Matt Kemp and Jamey Carroll are similar? Really? Chad at Memories of Kevin Malone broke down the two players defensive numbers. It ain't pretty. Both Kemp and Carroll have struggled defensively this year.

Sons of Steve Garvey had some costume ideas for some of the Dodgers on Empire Strikes Back Night at Dodger Stadium. Jamey Carroll as 4-LOM is hilarious. I crack up every time I see their pictures side-by-side. 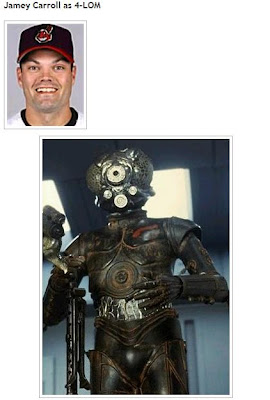