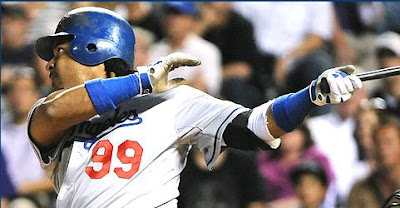 Manny Ramirez hit a two-run homerun off of Jeff Francis in the sixth inning of tonight's game in Colorado. It was Manny's first homer since April 18th. It also snapped his 43 at-bat homerless streak at Coors Field, the most he had gone without homering at any stadium that he's played in. After he hit the homerun, the cameras caught a glimpse of Manny rolling an oxygen tank in the dugout. That thin mile-high air is no joke.

The two runs batted in moved him into a tie for 18th place all-time with former Dodger Frank Robinson. Those were rbi number 1,811 and 1,812.
Share |
Posted by Dodgerbobble at 9:21 PM