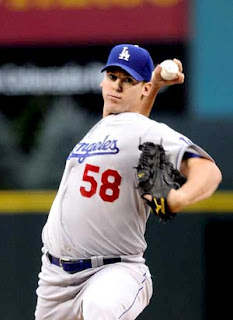 The four game-winning streak came to an end tonight, as the Dodgers lost 5-3 to the Colorado Rockies. Starter Chad Billingsley had a rough night going 6 innings and giving up 3 earned runs. He walked five Rockies and struck out NONE. Bills gave up a solo homerun to Todd Helton in the 6th inning, ending an MLB-leading 92-inning stretch without allowing a homerun.

After scoring 23 runs in the last four games, the Dodger offense failed to show up tonight. A two-run homerun by catcher Rod Barajas with two outs in the ninth came too late.

Manny Ramirez was not in the starting line-up again for the third straight game. Joe Torre says the benching has nothing to do with a deal the Dodgers have in place with the White Sox, who claimed Manny off the waiver wire on Friday. So why is the best hitter on the team being benched?

"This is just my dumb move. There is no reason I can give you that makes sense. A lot of what I do is a feel thing."

Yeah right. Manny appeared as a pinch-hitter in the seventh inning and struck out.

In other Dodger news:

Carlos Monasterios will make one more start Tuesday night against the Phillies in place of Vicente Padilla.

Russell Martin is expected to have his broken right hip rescanned next week to determine if the fracture is healing properly.

This Day In Dodger History:

August 28, 2002
Eric Gagne, who at the beginning of the 2002 season wasn't even sure if he was going to make the ballclub, notches his 45th save, setting a franchise record and earning a bottle of Dom Perignon autographed by each Dodger teammate.


"It's kind of weird, seeing a little Canadian in the record books for a Dodger," said Gagne. "I'm proud to be in it."

Gagne moves past Todd Worrell, having already bested Jeff Shaw. He has more in a season than Ron Perranoski or Mike Marshall or Jay Howell or Steve Howe.
"It shouldn't be just my name on it, it should be the whole team," said Gagne.

Although Gagne broke the record with a flourish, striking out the side in the 9th inning, preserving a 1-0 win over the Arizona Diamondbacks at Dodger Stadium for starter Odlis Perez. The 26-year-old also made it exciting by allowing a single and a four-pitch walk.

Gagne would save seven more games in 2002, giving him a total of 52 for the season.

Dodger first baseman Steve Garvey enjoys a monstrous night against the St. Louis Cardinals, collecting three doubles and a pair of home runs – including a grand slam – as he piles up 14 total bases in an 11-0 victory. Garvey, who scores five times and drives in five runs, falls one base shy of the Los Angeles Dodger single-game record for total bases set by Davey Lopes on Aug. 20, 1974. His standout performance helps the first-place Dodgers maintain their 8 ½-game lead in the National League West. The dependable Garvey went on to enjoy one of the best seasons of his career, batting .297 with 33 homers and 115 RBI while helping the Dodgers to the N. L. Western Division title and an appearance in the World Series.