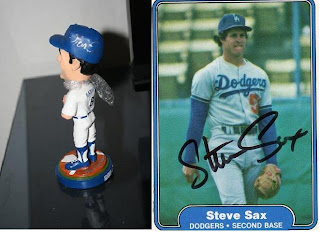 Thursday, September 9, was Dodger Day at the LA County Fair in Pomona. Four former players appeared at the event, Steve Sax, Maury Wills, Steve Garvey and Fernando Valenzuela. These events always get crazy, but I know that it's a lot crazier when Garvey and Fernando appear. I knew I had to get there as early as possible. My mission was to get Steve Garvey to autograph his bobblehead. 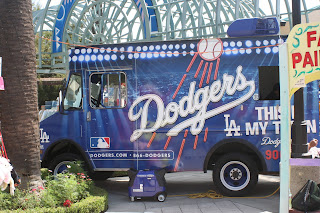 The appearances began at 4:00 pm, with Steve Sax signing first for an hour. They would continue every hour after that for one hour at a time. Maury Wills was at 5:00, Steve Garvey at 6:00 and Fernando at 7:00.

I arrived at the fair at 1:15, hoping it would be early enough. I'm always very late to these things. Well, I was early enough. There was only one line when I got there and I was about 30 people back. Security told us that we would have to get back in line once we got Sax's autograph. THERE WAS JUST ONE LINE? This had disaster written all over it.

Standing in line, it's always fun to chat with the people around you, and I did meet some nice people waiting for Steve Sax. I can't remember all of their names, but a couple of them said they read the blog. COOL! They all had some nice Dodger stories to tell.

Once 4:00 rolled around, the line moved quickly. I noticed there was a second line forming off to the side. I asked them what they were waiting for. Some people were waiting for Garvey, some for Fernando. OK, so this is where I'm gonna go once I get the Sax auto. Well, I finally got to Sax, and he was very nice. I told him I was huge fan and he said thanks. He signed my 1982 Fleer rookie card for me. 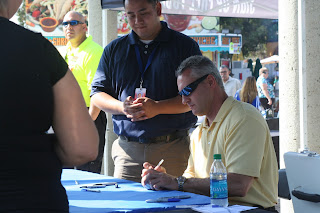 Once I got the autograph, I went to that secondary line people were waiting in. I was about 40 people back, so I was in good shape for Steve Garvey. Maury Wills was next, but I was there to get Steve Garvey's autograph. While waiting, I met some more great people. The first person I met was a man named Bruce. You can read Bruce's Dodger Day experience here. He had some nice stories to tell. While I was chatting with Bruce, a couple of guys stepped into line and started talking to Bruce, I figured they were related. They weren't, they had just met each other waiting for Steve Sax. So, who were these guys? One was Greg from Plaschke Thy Sweater Is Argyle and Memories of Kevin Malone. He recognized me from the site. The other was a nice guy named Eric. We chatted for a while, then things got chaotic. Security had to do something with the second line of people that had formed. So, they formed three seperate lines, one for each of the remaing players. Why didn't they think of this earlier?

I jumped into the Steve Garvey line. Waiting in the Garvey line I met more poeple, with more stories to tell. This is what the fans do to pass the time. Looking to the left, there was a huge line starting to form for Fernando. I didn't want any part of that. I was sticking to my mission, Garvey then go home. 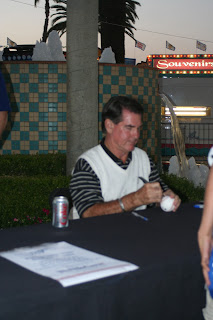 Garvey showed up on time, and the line started moving. I've got to admit, this was one of the good things about the event, they moved the line along nicely. I got the bobblehead out. Once I got to the front of the line, that's when Fernando showed up. The crowd went crazy. But I was there for the Iron Man. Once it was my turn, I handed him the bobblehead. I told him to sign the helmet. Then I started telling him I was a huge fan, and that it was nice to meet him. While I was blabbering away, I noticed he was signing the base of the bobblehead. I asked him if he could please sign the helmet. He said sorry, then went on to give me an additional signature right on the side of the helmet. I got two Garvey autographs on one bobblehead! Nice. Mission accomplished. 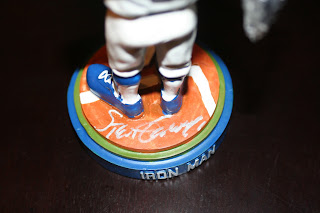 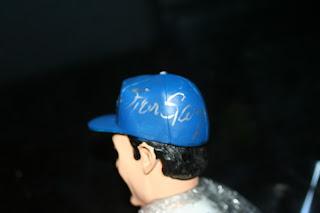 As I was walking away, Eric asked me if I wanted to wait for Fernando. I took one look at the line, and said, no. There were at least 1,000 people in line for Fernando, if not more. That's when I knew it was time to go home.

Overall, I'd say I had a good day. I got 2 of the four player's autographs. I was there for Garvey, so getting Sax was a bonus for me. I met some nice people too. It was also nice to meet Greg from MoKM in person. That's the second Dodger blogger I've met now, Roberto from Vin Scully is My Homeboy being the first.