With the Dodger season finally over, it's time to look forward to 2011. I'm not gonna talk about the team right now. I'll save that for another day. Today I wanna take a crack at predicting next year's bobblehead giveaways.

This year the Dodgers gave away four bobbleheads, Andre Ethier, James Loney, Jonathan Broxton and Matt Kemp. It was Kemp's second bobblehead in two years. I think it's safe to assume Kemp will not get a bobblehead three years in a row. The other three didn't have spectacular seasons, so they probably won't get bobbleheads again in 2011 either.

So who will get nodders next year?

The Dodgers have given away four bobbleheads each year for the last three years. Let's assume they keep up this trend. I think they start with the newest Dodger, manager Don Mattingly. They gave Joe Torre a bobblehead in 2008. What better way to make Donnie Baseball feel like a Dodger than to give him a bobblehead?

Who's next? Well, most of the offensive players have recieved bobbleheads over the last three seasons, so I think the Dodger go with three pitchers in 2011. The first one will be Chad Billingsley. He finished 2010 nicely and has been solid for the team over the last few years. Chad's a beast. He deserves a bobblehead.

The third bobblehead will be Hong Chih Kuo. Kuo had an amazing 2010 season, finishing the season with a 3-2 record, leading all Major League relievers with a 1.20 ERA. That 1.20 ERA set a new record for a Dodger pitchers in a season, previously held by Eric Gagne. In 56 appearances out of the bullpen, he pitched 60.0 innings, struck out 73 walking just 18 while converting 12 saves in 13 chances. He also became the first Taiwanese-born player to play in the All-Star game. I think the Dodger will honor his All-Star appearance with a bobblehead, although most Dodger fans would like to see him honored with a bat flip bobblehead.  Mike at thelfp.com showed us what it could look like: 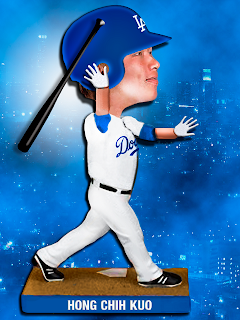 The last bobblehead the Dodgers will give away in 2011 will be Clayton Kershaw. The "Ace" of the staff must be honored. Kersh really stepped it up in 2010, finishing his third major league season with a record of 13-10, an ERA of 2.91, 32 starts, 204 1/3 innings and 212 strikeouts. His wins, starts, innings and strikeouts are all career highs. He deserves a bobblehead, right?

So those are my 2011 Dodger bobblehead predictions. Any thoughts? Is there someone more deserving?  Let me know.
Share |
Posted by Dodgerbobble at 9:14 PM