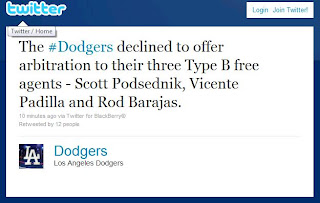 No arb for Pods, Pad or Rod. The Dodgers declined to offer arbitration to their three Type B free agents; Scott Podsednik, Vicente Padilla and Rod Barajas. Am I surprised? Not really. I guess the Dodgers were worried they'd accept? It's just sad.  Very, very sad. They didn't offer Randy Wolf or Orlando Hudson arbitration last year either.

For Hiroki Kuroda, it was Dodgers or bust. During a news conference today at Dodger Stadium, Kuroda said he never seriously considered signing with any other Major League club and was excited about the one-year, $12 million deal he signed last week to remain with the Dodgers for a fourth season. I'm happy he's back too. 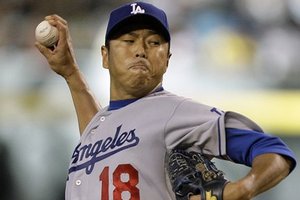 Frank and Jamie are officially divorced. Frank and Jamie McCourt are officially divorced, even though their divorce proceedings could last several more years. Los Angeles Superior Court Judge Scott Gordon granted a request to change the McCourts' marital status from separated to divorced, according to court documents.
The status change has no impact on the proceedings. Any assets determined to be community property would be considered as shared assets through the date of the separation, July 7, 2009, rather than the date of the divorce.
Share |
Posted by Dodgerbobble at 8:16 PM