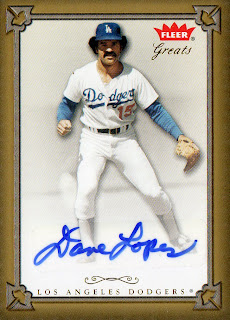 Three weeks ago, the Dodgers announced their 2011 coaching staff. The Dodgers' new first base coach will be Davey Lopes, who's returning to the organization after 29 years. It's nice to see a Dodger legend come home after being away so long.

Of course, Lopes was part of the longest-tenured infield in Major League history along with Steve Garvey, Bill Russell and Ron Cey from 1973-81. With the Dodgers, he led the NL in stolen bases twice (1976-77), won a Gold Glove in 1978, and played in four consecutive All-Star games from 1978 to 1981. His 413 stolen bases are the second most in Dodger history behind Maury Wills.

One of my favorite auto cards in my collection is the 2004 Fleer Greats Davey Lopes. The white uniform against the white background give the picture a clean look. Lopes' afro/mustache combo is amazing by, the way. All of this in a gold frame. Classic. 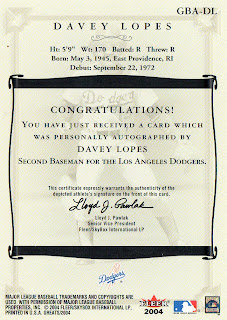 I'm real excited about Lopes' return, and I'm hoping he can help Don Mattingly with some of the younger players who seemed to take a step back in 2010.
Share |
Posted by Dodgerbobble at 6:10 AM