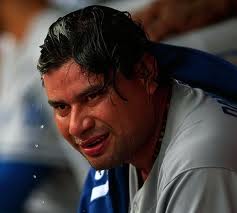 
The 33-year-old was the Dodgers' 2010 Opening Day starter in his first full season with the club and went 6-5 with a 4.07 ERA in 16 starts during an injury-shortened campaign. He posted career-best marks with a .226 opponents' batting average, an average of eight strikeouts per nine innings pitched and a 3.5 strikeout-to-walk ratio, which was the ninth-best mark among National League starters (min. 15 starts). The right-hander was dominant at Dodger Stadium, going 4-2 with a 1.61 ERA (8 ER/44.2 IP) and limiting opposing hitters to a .168 batting average in his six home starts. Padilla also tossed his fourth career shutout on Aug. 4 against San Diego, taking a no-hit bid into the seventh inning and striking out nine in a two-hit effort.

After he was originally signed by Los Angeles as a free agent on Aug. 19, 2009, Padilla went 4-0 with a 3.20 ERA in eight games (seven starts) over the final two months of the season. He continued his success in the '09 postseason, going 1-1 with a 3.63 ERA in three starts, which included seven scoreless innings in the Dodgers' NLDS series-clinching victory in Game 3 at St. Louis.