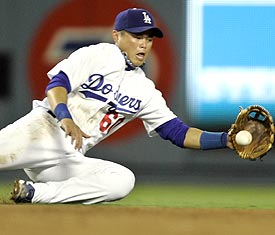 The middle infielder, who is all glove and no bat, is out of options. He actually wasn't that bad at the minors league level, batting .303 over four season in AAA. But he could never hit major league pitching, batting just .191 in 173 at bats over four seasons in Los Angeles.


Dodger Thoughts' Jon Weisman has the scoop on Antonini:

At least the Dodgers got something in return for Hu, who was out of options.
Share |
Posted by Dodgerbobble at 8:09 PM