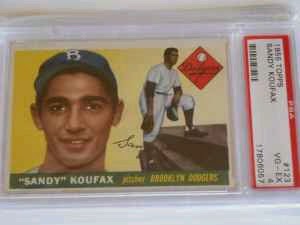 Have you ever wanted to own a 1955 Topps Sandy Koufax rookie card? You could be the owner of the Koufax rookie and some other Dodgers from the '55 Topps set including a Roy Campanella, Gil Hodges, Jim Gilliam, Pee Wee Reese, Jackie Robinson, Sandy Amoros, Duke Snyder, and Carl Furillo.

How can you own all those cards? AJ's BBq Pitt in East Los Angeles will be holding a raffle in April to help raise money for the City of Hope Cancer Research Center .The winner of the raffle will take all the cards mentioned. I spoke with Jim, the owner of AJ's, and he gave me all the details. Here's their posting on Craigslist:


1955 Brooklyn Dodgers Memorabilia.
This is a Raffle To Help City of Hope Cancer Research Center.
1955 Sandy Koufax Rookie Card PSA Grade #4 is only 1 card in the starting lineup for this raffle.
Starting Lineup.. 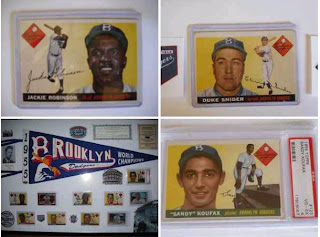 Not only does the raffle winner get all those cards, they'll also win a 1955 Brooklyn Dodgers Pennant signed by Pee Wee Reese and Johnny Podres! They're giving away a great prize and it's all for a great cause. Hat tip to Fredy for this one.
Share |
Posted by Dodgerbobble at 8:27 PM