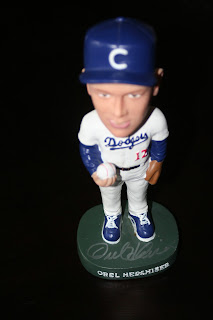 Former Dodger pitcher Orel Hershiser made an appearance today at Living Spaces in Rancho Cucamonga. He was scheduled to sign from 10:00am to 12:00pm.

When I arrived at 9:30, I was about 300 people back. As usual, I met some great Dodger fans in line. Those of us at the back of the line were out in the cold, while the people in the front of the line were in the store. We noticed that Orel had arrived a bit early. We saw him signing at around 9:50.

The line moved at a snail's pace, and it was colder than Alaska out there, but I had a good time chatting with the people in line.  While waiting, Vic "The Brick" Jacobs, from 570am KLAC showed up. He took some pics with the Dodger fans.

Finally, at around noon, I made it to the front of the line. I brought my Orel Hershiser Clinton Dodgers bobblehead to get signed. Orel was very nice. He shook my hand and said he liked the bobblehead. I handed him the bobble and silver sharpie, but I was worried that he wouldn't have enough room to sign his long name. He ended up signing the base of the bobblehead, and he did have enough room, although it looks like he squeezed the last few letters of his last name in. I'm happy with it. 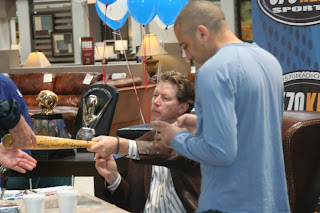 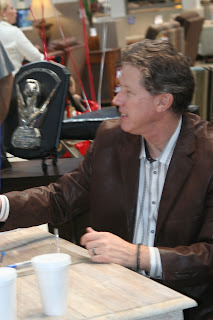 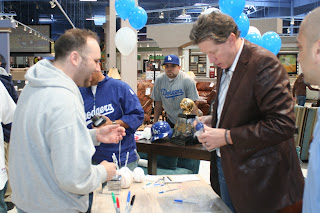 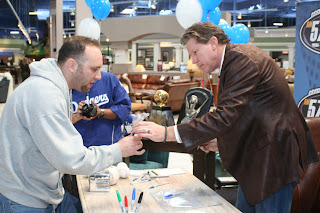 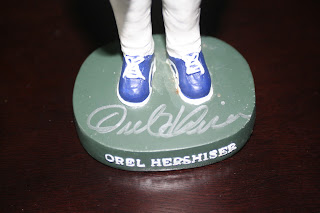 I had a great time today. I need to thank Orel Hershiser, Gustavo from authenticsignings.com for the info on the appearance, Living Spaces in Rancho Cucamonga and 570 KLAC. Also, I want to give a shoutout to the people in line who made the two hours just fly by; Nathan, Daniel and Louis.
Share |
Posted by Dodgerbobble at 3:58 PM