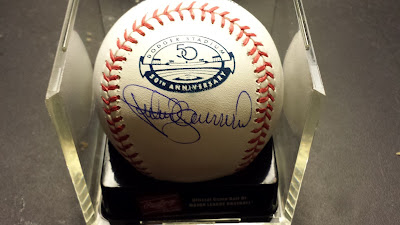 Growing up in the 80's, one of my favorite Dodgers was Pedro Guerrero. When I found out he was going to be making an appearance at Harry's Dugout I told myself I had to get down there, especially since I missed his last public signing.

I made the trip down to Harry's Dugout with my buddy's Mike and Franz. None of us had been to Harry's before and we were all looking forward to getting Pedro's auto and checking out a new card shop.

When we arrived we notice there were just a few people hanging out, so we walked into the shop and paid for the autographs right away then waited in line. As usual we chit-chatted with everyone in line and the time flew by quickly.

Pedro was scheduled to sign autographs from 1-3:30. He arrived early and started signing right away. Pedro was signing quick and the staff was very well organized, taking our pictures and getting everyone through at a nice pace. I can't tell you how much I love an event like this. Anyway, when I got to the front of the line I told Pedro that I was a huge fan.  I had him sign a Dodger Stadium 50th Anniversary baseball. He had such a nice career at Dodger Stadium plus he was a huge part of the 1981 World Series Championship team, I really felt he deserved to be on one of these commemorative baseballs. 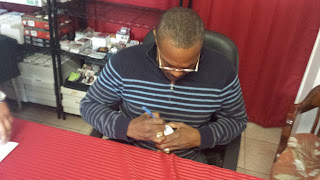 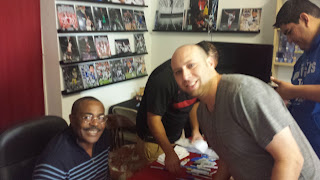 I want to thank Pedro Guerrero and Harry's Dugout for hosting a well organized event.  I can't wait for the next one. Also, it was nice hanging out with David, Alex, Andy, Andrew, Gus, Big Mike and of course Franz and Spiegel. You guys make waiting in line a lot easier.
Share |
Posted by Dodgerbobble at 9:06 PM