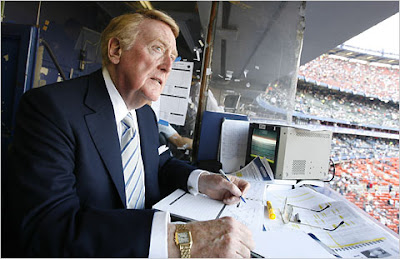 Today marked the 60th anniversary of Vin Scully's first broadcast with the Dodgers, alongside Red Barber and Connie Desmond. His first game was with the Brooklyn Dodgers against the Phillies at Connie Mack Stadium.

Here's what Vin had to say:

"That first team, the so-called Boys of Summer, that was my graduating class. I mean, look at the team then. I had Don Newcombe, Gil Hodges, Jackie Robinson, Pee Wee Reese, Billy Cox, Roy Campanella, Duke Snider, Carl Furillo and Carl Erskine. That was such an amazing collection of players, so I guess that was the team that made the most impression on me."

The Dodgers played a video tribute to him in the top of the eighth inning, and the crowd gave him a standing ovation.

This could be Vin's last year with the Dodgers. I really hope he decides to come back for another season. I appreciate every game he calls. It really is a blessing to listen to the greatest sports broadcaster of all time.
Share |
Posted by Dodgerbobble at 9:19 PM