Former Dodgers closer Eric Gagne retired today after 10 years in the majors. Gagne will go down as the greatest closer in Dodger history. Gagne won the National League Cy Young Award as the Dodger's closer in 2003, a season in which he converted all 55 of his save opportunities as part of a three-year stretch in which he successfully converted a record 84 consecutive save chances.

When Gagne came in to close a game, the Guns n Roses song "Welcome to the Jungle" was played as he came out of the bullpen. The phrase "Game Over" was used whenever he came in as well. The Dodgers marketed "Game Over" and Gagne's image like crazy.


Of course his name was mentioned in the Mitchell Report, which claimed he used performance enhancing drugs. Gagne tried to make a comeback earlier this year as a non-roster invitee to spring training with the Dodgers.


On April 30th, 2004, The Dodgers gave away Eric Gagne bobbleheads to the first 50,000 fans in attendance. The bobblehead commemorates Gagne's winning of the National League Cy Young Award in 2003. The bobblehead depicts Gagne in his famous "fist in the air" pose. He's also wearing those famous goggles of his. 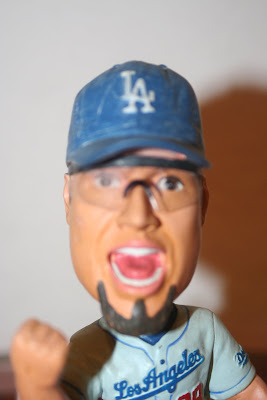 Another one of the bobblehead's features was that white bulid up on Gagne's unwashed hat. Nasty! 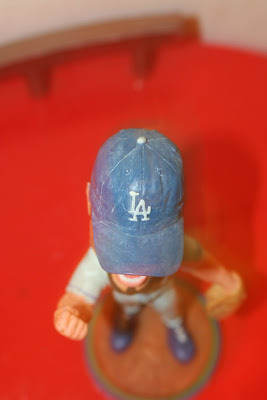 I know Eric Gagne was named in the Mitchell Report and his name will always be linked to PED's, but he gave Dodger fans a lot of excitement for three seasons. He also gave Dodger fans a reason to stay until the 9th inning. It was really fun watching him pitch.