Bobblehead Of The Day: Don Zimmer 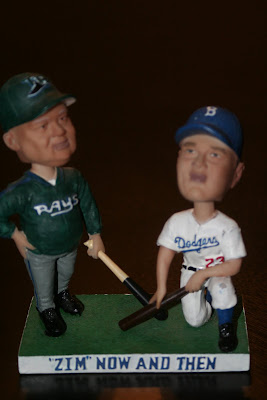 On Saturday, June 23, 2007, the Tampa Bay Devil Rays (this was before they droppd the Devil from their name) gave away Don Zimmer "Now and Then" bobbleheads to the first 15,000 fans in attendance. Presented by Regions Bank, this dual bobblehead features Zimmer both in a Brooklyn Dodgers uniform and in Rays gear. I did not attend this game. This was an eBay find.

The Devil Rays hosted the Dodgers that night, Turn Back the Clock Night. Vintage uniforms were worn by both teams. The Rays wore the uniforms of the 1950-era Florida State League St. Petersburg Saints and the Dodgers wore the 1955 World Champion uniforms.

Zimmer also won a World Series with the Los Angeles Dodgers in 1959.

Here are some other views of the bobblehead: 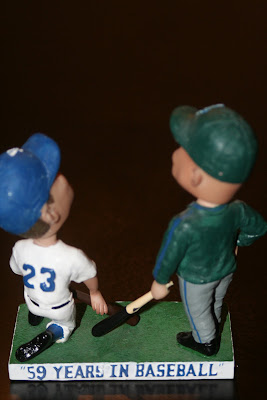 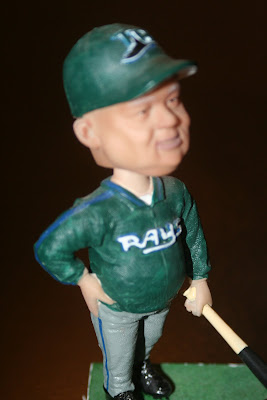 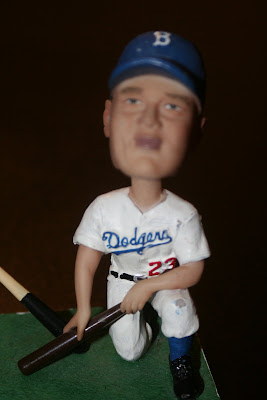 This a bobblehead that I wanted ever since I heard they were being given out at Tropicana Field. I remember listening to the game on the radio and hearing Vin Scully talking about the special giveaway.

Don Zimmer has been in professional baseball for 62 years. He won 906 games as a manager. He has six World Series rings, two as a player and four as a coach. He was an All-Star in 1961. But this is my favorite Zimmer moment: