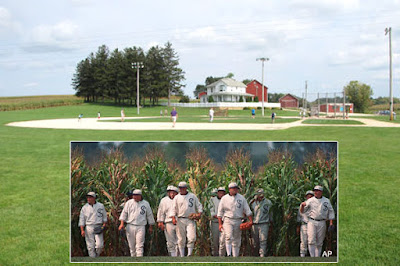 The home from the movie "Field of Dreams" is up for sale. The 193-acre farm where Kevin Costner and James Earl Jones filmed 1989's "Field Of Dreams" has been listed for sale by its owners after over a century of family ownership. The asking price for the whole lot is $5.4 million.

Fox Sports may make some changes to it's baseball programming. Fox's regular-season baseball next year might largely migrate to prime time — and include more games in each game TV window. Fox is testing prime time with regionalized coverage of four games May 22, led by New York Yankees-New York Mets, and three on June 26, including Yankees-Los Angeles Dodgers. Depending on those ratings, Fox could have much more MLB prime-time action next season.

The bobblehead craze is about a decade old, and it's bigger than ever. Jim Caple at ESPN.com's Page 2 visits Bensussen Deutsch & Associates Inc. in Woodinville, Washington, the company that make many bobbleheads for sporting events around the country. The company says it is scheduled to deliver more than 1 million dolls combined for at least 44 promotional dates this season.
Share |
Posted by Dodgerbobble at 9:49 PM