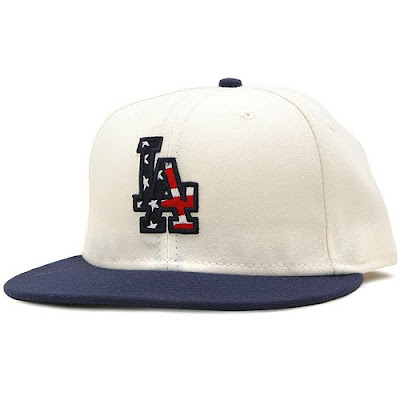 The Dodgers return home today to play the Arizona Diamondbacks. They'll be wearing special edition Stars and Stripes hats to commemorate Memorial Day. These hats will also be worn on July 4th and September 11th to raise awareness for the Welcome Back Veterans Fund. You can buy one of the hats here. MLB.com will donate $1 to the WBV Fund for each cap sold.

In honor of Memorial Day, approximately 1,000 veterans and active-duty military will attend the game courtesy of the Los Angeles Dodgers. Army member Gigi Theocharides will sing the National Anthem and God Bless America and a representative Color Guard will be presenting Colors from the Army, Navy, Air Force and Marines before the game. Military members will also accompany former Dodgers on the field for the ceremonial first pitch.

Today is also the first Dodger fan club broadcast. Fan club members will call the game from the Vin Scully press box. Three Women In Blue winners, three Boys in Blue winners and three Viva Azul club winners will each call an inning apiece and the entire game broadcast will be posted on dodgers.com on Tuesday. Fans can then listen and vote for their favorite broadcaster and a winner for each club will be chosen at the end of the season. The grand prize winners will receive Dodger tickets and a guest appearance on Dodger Talk on KABC. Fans can register to be broadcasters and vote for their favorites at www.dodgers.com/broadcaster.

Today is also a giveaway day, Manny Ramirez Kids Batting Practice Jersey. Presented by Cacique, the first 15,000 kids 14 and under will recieve this jersey.