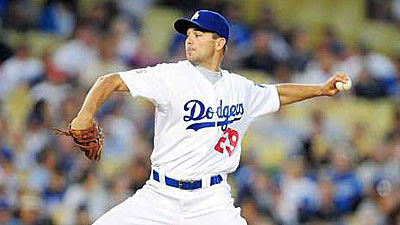 According to the LA Times, the  Dodgers have signed pitcher Ted Lilly to a three-year deal. The dollar amount on the contract hasn't been announced yet. The deal is expected to be finalized once Lilly passes a physical next week.

The Dodgers now have three of the five rotation spots filled, with Chad Billingsley and Clayton Kershaw holding down the other two spots. The team is still expected to have interest in re-signing Hiroki Kuroda and Vicente Padilla.


I'm curious to see what the Dodgers are gonna pay Lilly over the next three seasons. I wouldn't be surprised if Ned Colletti overpayed for the 34 year old. Well, maybe Frank McCourt is willing to spend some money this offseason.
Share |
Posted by Dodgerbobble at 7:53 PM