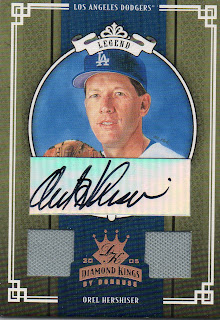 Today is the 22nd anniversary of Kirk Gibson's famous walk-off homerun in game 1 of the 1988 World Series . It may be the greatest moment in Dodger history, if not baseball history. The Dodgers would go on to win the World Series in five games.

Tomorrow is the anniversary of game 2. Orel Hershiser started that game. It was an amazing outing by the Bulldog, one that was, in my opinion, overshadowed by Gibby's homerun the night before. But it shouldn't be forgotten.

With a rested Orel Hershiser on the mound, the Dodgers took a 2–0 lead. Hershiser got all the runs he needed in the third, with Mike Marshall providing the big blow with a three-run homer. Hershiser went the distance, allowing only three singles, all three hit by Dave Parker.

Hershiser also contributed offensively, with three hits, including an RBI double in the fourth inning. In the five-run third inning, he singled, went to third on an opposite-field single by Steve Sax and later scored. He was the first pitcher to get three hits in a World Series game since 1924.

That's what you want to see from your "Ace", a gem.

With that in mind, I wanted to show one of my favorite Orel Hershiser cards. It's a 2005 Donruss Diamond Kings autograph game-used jersey card, #'d 16/25. This was Orel's third Diamond Kings appearance, with the previous two coming in 1986 and 1993. 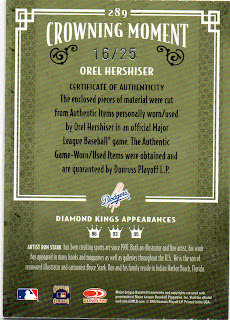 I love this card, it always reminds me of '88 and Orel's Game 2 performance.
Share |
Posted by Dodgerbobble at 9:47 PM