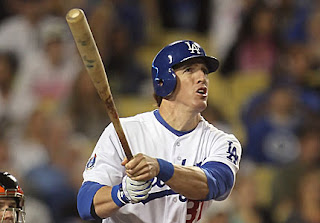 A couple of notes from the Dodgers today. After the Dodgers picked up their part of Scott Podsednik's $2 million option on Monday, he declined his part of the mutual option today and became a free agent. I guess Pods feels he can make more money elsewhere. He can still return to the Dodgers.

So, who will play in left field in 2011? One option will be Jay Gibbons who signed a one-year deal with the Dodgers today. Gibby will earn $650,000 with another $150,000 in plate-appearance incentives.

I was a little worried about the Dodgers picking up the Podsednik option. I don't think Pods is an everyday player, and I was scared Ned Colletti viewed him as one.

Gibbons isn't an everyday player either, but I don't mind the signing. He'll be fine as a left-handed option coming off the bench and as  a spot starter. His biggest flaw was playing the field. It was painful watching him play defense.
Share |
Posted by Dodgerbobble at 6:43 PM