Bobblehead Of The Day: Russell Martin

Russell Martin finally got a day off yesterday after starting 22 straight games. Russell is in the midst of a career-high 15-game hit streak and is batting .268 with four home runs and 12 RBI, so I understand why Joe Torre wanted him in the line-up everyday. He's hot. He's caught 323 2/3 innings so far this season, which ranks him second in the National League behind the Cardinal's Yadier Molina.

Because Russell has been playing so well lately, I thought I'd post his 2007 Dodger Stadium bobblehead. The bobblehead was given away on August 2, 2007 to the first 50,000 fans in attendance. Presented by Subway, this bobble was made by P Squared Promos. This was the last of three bobbleheads given away that year. The first two were Nomar Garciaparra(April 26) and Rafael Furcal(July 6). The Dodgers held online voting for the last bobblehead 0f 2007, and they chose Rusell Martin.

The Dodgers played the San Francisco Giants that night and lost 4-2. Barry Zito was the winning pitcher and Brett Tomko took the loss(I'm shocked).

Let's take a look at the bobblehead. 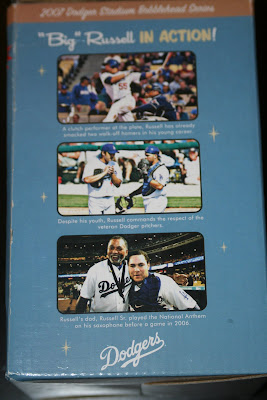 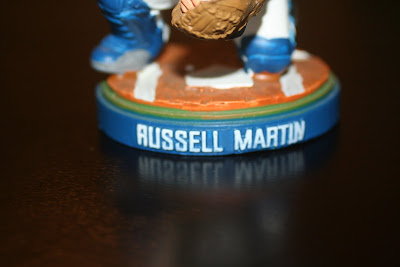 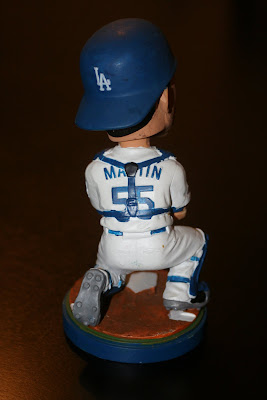 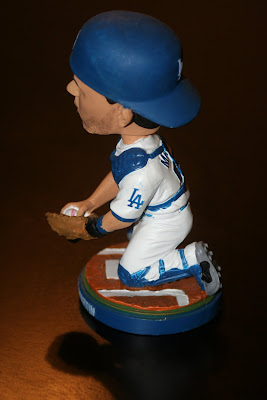 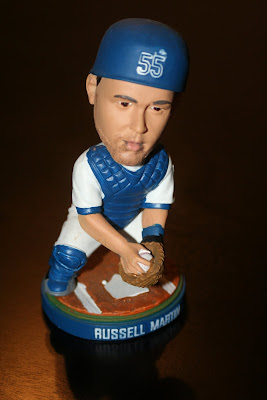 This is one of my favorite bobbleheads. It's not a player in the traditional batting stance, but in a defensive position, blocking the plate. The bobblehead looks like Russell too. They got the facial hair and skin tone down. 2007 was a good year for Dodger Stadium bobblehead SGA's, the Nomar and Furacal are also two more of my favorites.

Up next: 2007 Rafael Furcal bobblehead
Share |
Posted by Dodgerbobble at 10:52 PM