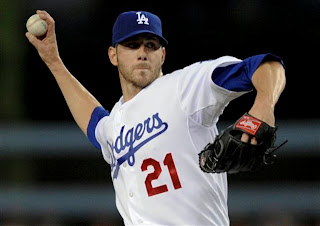 Ned Colletti put the finishing touches on the Dodgers' starting rotation today by signing free-agent right-hander Jon Garland to a one-year contract with a vesting option for 2012.

Garland will be guaranteed $5 million for 2011 with an $8 million option in 2012 that becomes guaranteed if he reaches 190 innings in 2011. He has reached that number in all nine seasons since he became a full-time starter.

I have no problem with this signing at all. Yes, Garland is an innings eater, having gone 131-114 with a 4.32 ERA during his 11-year career. He has averaged more than 32 starts and 200 innings per season in each of his nine years in the majors. He's been on the disabled list just once in his career.

Garland is a number a  #4 or #5 starter in this league and that's what his role will be on the Dodgers, the number five starter behind Clayton Kershaw, Chad Billingsley, Ted Lilly and Hiroki Kuroda.
Share |
Posted by Dodgerbobble at 1:47 PM