Will The Dodgers Non-Tender Russell Martin? 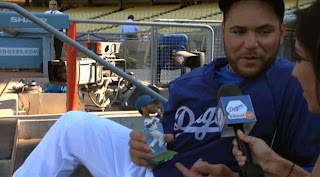 The Dodgers have to make a decision on Russell Martin. The team could non-tender the catcher who has seen a steady two year decline and who is also an injury risk. In 2007, Russ hit .293 with 19 homeruns and 87 RBI. He was the face of the franchise, and it looked like he was on his way to becoming a star in Los Angeles. But that's not what happened.

The Dodgers could non-tender him, or take their chances in arbitration. Russell was paid $5.05 million  in 2010, his second of four arbitration-eligible seasons. Even with the decline in numbers and the hip injury, Russ could still get a raise in arbitration. Fangraphs believes he could get at least $6 million, but it could be closer to $7 million.

I have a soft spot in my heart for Russ, who is from the same part of Ontario as my mother. But as a Dodger fan, I want what's best for the franchise. The Dodgers have until December 2 to make a decision.

So, What should the Dodgers do?
Share |
Posted by Dodgerbobble at 3:33 PM