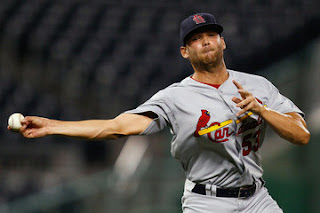 The Dodgers announced today that they have acquired right-handed pitcher Blake Hawksworth from the St. Louis Cardinals in exchange for infielder Ryan Theriot. The announcement was made by Dodger General Manager Ned Colletti.

Theriot, 30, batted .242 with one home run and eight RBI in 54 games with the Dodgers last season after he was acquired along with Ted Lilly from the Cubs at the July 31 trade deadline in exchange for Blake DeWitt and two minor league pitchers. The Louisiana native batted .270 with two home runs and 29 RBI in 150 combined games in 2010.

This is a nice move by Ned Colletti. The Dodgers were gonna non-tender Theriot anyways, so they essentially got Hawksworth for nothing. Now, Ned's got his middle reliever. He's slowly putting a nice team together. Catcher and Left Fielder will probably be addressed next.
Share |
Posted by Dodgerbobble at 3:03 PM