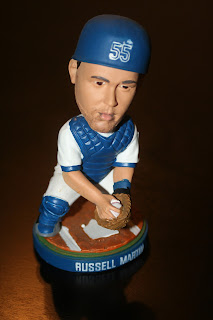 The Dodgers have non-tendered Russell Martin. The two sides tried to work out a deal that would keep him in Los Angeles. According to the LA Times Dylan Hernandez, Martin's last proposal to the Dodgers was $5 million plus $1 million in incentives for 2011. That seems a bit much for a declining catcher coming off of a hip injury. Ned Colletti says the Dodgers still have interest in bringing Martin Back. According to SI.com's Jon Heyman, the Dodgers tried to trade Russell first.

So, who'll be the next Dodgers catchers? Dylan Hernandez says the team is close to re-signing Rod Barajas. AJ Ellis had a nice September. So, we could possibly have a Barajas/Ellis tandem in 2011.