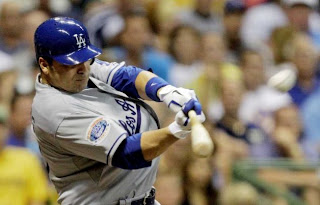 After non-tendering Russell Martin earlier tonight, the Dodgers wasted no time in signing another catcher. Rod Barajas will be back in Dodger blue in 2011. According to the LA Times' Steve Dilbeck, the deal is for one year, pending a physical.


Barajas, was a late-season pickup for the Dodgers last season, hitting .297 with five home runs and 13 RBI in 64 at-bats. Including his time with the Mets, he had 17 home runs and 45 RBI on the season.

I'm curious as to what the terms were. Regardless, signing Barajas for one year is a good move for the Ned Colletti. The hole at catcher is now filled, leaving the left field slot still open.

Update:
The contract details are in, and Barajas will make $3.25 million in 2011. I didn't expect Barajas to get that much. I was thinking he'd get something in the $1.5-2 million range. So Ned overpaid a bit, I'm not really shocked. At least it's only a one-year deal.
Share |
Posted by Dodgerbobble at 11:04 PM