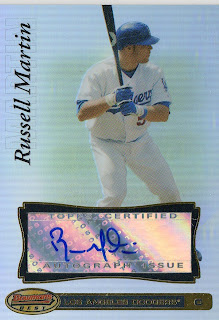 On Thursday, the Dodgers non-tendered catcher Russell Martin, making him a free agent. Even though Russell's numbers had been declining over the last 2 seasons, I still hoped the Dodgers could come to an agreement with him. Unfortunately, his asking price for 2011 was a bit steep at $5 miilion + $1 million in incentives. I understand why the Dodgers did what they did. I wish the best for Russell. Hopefully he finds a team that gives him a chance to start and maybe even regain that 2007 All-Star form he lost.

Since Russ is leaving LA, I wanna show his auto card  before he puts another team's uniform on. This is his 2007 Bowman's Best Autograph #49. I always wanted to get Russell's bobblehead autographed. Since I'll probably never get that opportunity, this is the next best thing. 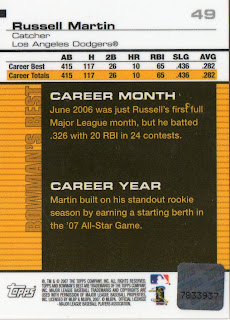