Some bobblehead news and notes: 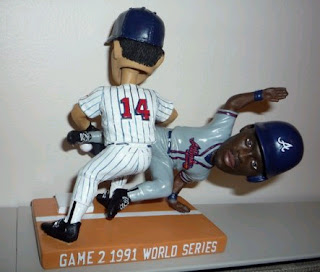 Twins to give away Hrbek/Gant bobblehead. This might be the coolest idea for a bobblehead ever (unless you're a Braves fan). The Minnesota Twins will be giving away a bobblehead remembering Kent Hrbek lifting Ron Gant off first base during Game 2 of the 1991 World Series. For those that don't remember what happened:


Atlanta's Ron Gant ripped a single in the third and after rounding first retreated back to the bag. Pitcher Kevin Tapani threw the ball to first where Gant had appeared to make it in plenty of time. That was until Hrbek, under the guise of attempting to apply a tag, lifted Gant off the base. Umpire Drew Coble called him out. The Twins would end up winning by one (3-2, to take a 2-0 series lead).

The 2011 season marks the 20th anniversary of the 1991 World Series Champion Twins. The giveaway date for this bobblehead hasn't been announced yet. 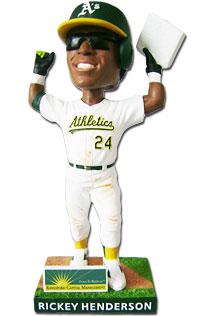 Diamondbacks to give away Kirk Gibson bobblehead. OK, so he's in a DBacks uniform, but it's still Gibby. This one will be given away on Saturday, August 6. Guess who the Diamondbacks will be playing that night. The Dodgers. No picture on this one yet.

Carmelo Anthony Bobblehead Conversion Kit. Kenny Be of Denver Westword shows Nuggets fans what they can do with their Carmello Anthony bobbleheads once he's traded. Funny stuff. 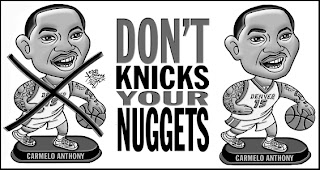