With the NBA All-Star game in town this weekend, there have been player appearances all over the Los Angeles area. My buddy Tom and I planned on going to a Bill Walton appearance early then hitting a Tony Parker appearance. That all fell through once we found out Dwight Howard would be signing autographs at Foot Locker at Third Street Promenade in Santa Monica. 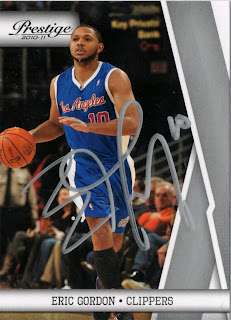 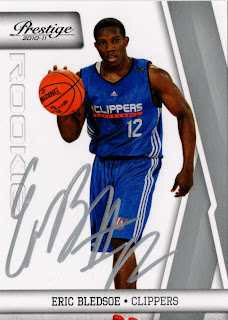 With Dwight Howard appearing at 2:45, we had time to hit some other signings. I couldn't make it to any early appearances, but Tom and his girlfriend Margaret did. Their first stop was to see Clippers Eric Gordon and Eric Bledsoe. There weren't a lot of people there, so they got me an autograph from both Clips. 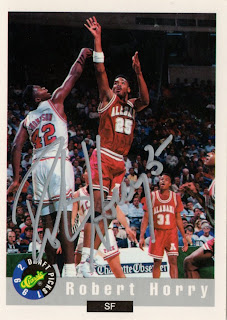 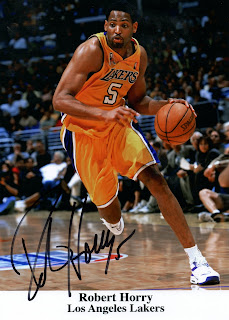 I finally was able to start hitting some of these signings, so I met Tom and Margaret at Westfield Shopping Center in Culver City. Inside the mall there was an All-Star Fan Jam. Chris Paul and Carmelo Anthony were both scheduled for Q&A sessions at Foot Locker and former Laker Robert Horry was scheduled to sign autographs at JC Penney. We went to the Robert Horry appearance first. There were about 50 people ahead of us. Horry got there 20 minutes late, but he was very nice. He signed multiple items and took pictures with fans. I got a college basketball card and Lakers picture signed.


Once I got there, I started walking towards the Foot Locker. As I made my way there, I saw a small crowd gathering around a very tall man. I thought it was Howard, but it wasn't. It was actually Thunder Center Serge Ibaka. I took a picture with the guy, then got into the line for Howard. Even though we didn't have a wristband, we were told to wait there. While waiting, we saw Lakers forward Matt Barnes. We took some pics of Matt, then continued to wait. After about 2 hours, we were told they would only let people with wristbands in for autographs. It was a huge waste of time. I only have myself to blame. I should have called first to see if there would be wristbands being handed out. 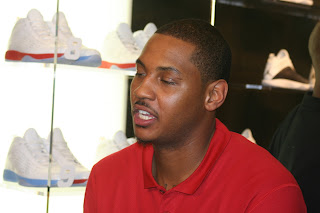 From there we decided to go back to Culver City for the Carmelo Anthony Q&A. When I got to Foot Locker for Melo, I walked right in. I stood in front of the media pit. Carmelo showed up 10 minutes late. The place went crazy once he showed up. The Q&A dealt mostly with his Air Jordan line, but the trade issue came up and Carmelo didn't answer that question. He didn't sign anything either. It was a great experience though. I shot some video of the session with my phone. The audio sucks, but at around 7 minutes in, you can hear Carmelo saying he'd like to see what Blake Griffin can do in the Dunk Contest and he also thinks the West will win the All-Star game.

I am going to the NBA Jam Session at the LA Convention Center tomorrow. My goal is to meet Blake Griffin, who will be making an appearance. I hope I get a chance to see the newest Slam Dunk Champion.
Share |
Posted by Dodgerbobble at 11:07 PM