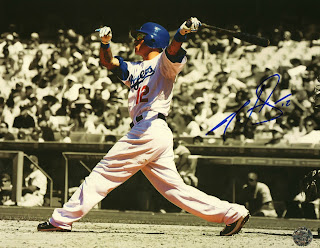 Dodgers Infielder Justin Sellers made an appearance at Valley Sports Cards & Memorabilia On Sunday, December 11. This was Justin's first public signing appearance. He was scheduled to meet fans and sign autographs from 1:00-2:00pm. The autographs were $20 each for any item or two for $35.

It was a pleasure watching Justin Sellers play in 2011. After getting called up to the Dodgers in August, Sellers played second base, shortstop and third, impressing at all three positions. Along with Dee Gordon, Justin brought some excitement to Dodger Stadium.

Now I really wanted Justin's autograph, and I tried getting it a couple of times at Dodger Stadium with no success. So when I heard he was signing at my local card shop in November, I was pretty excited. Unfortunately, that appearance was cancelled because the Dodgers asked him to play Winter ball in the Dominican Republic. The event was finally rescheduled for December 11. 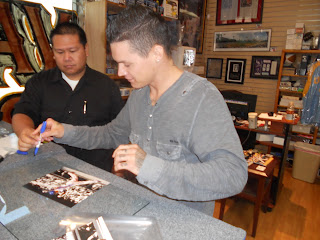 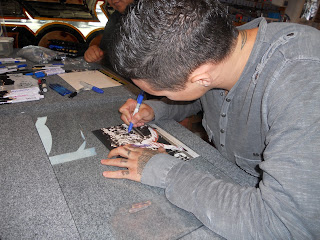 Since Valley Sports Cards is only a few minutes from my home, I didn't have to get there too early. When I arrived there were only a few people waiting. I paid for two 8x10's and two autographs, picking one set up for Mike at Nomo's Sushi Platter, then I got in line.

Justin arrived right on time at 1:00, and started signing a few minutes later. He was very friendly, chatting with everyone and posing for pictures. When I got to the front of the line, I shook his hand and told him I enjoyed watching him play and I hoped to see him play some more in 2012. He signed the 8x10s and took a  few pictures with me.


This was one of the better events I have been too. Everything went so smoothly and there was a great atmosphere at the shop. Thanks to Justin Sellers, I hope he gets a little playing time in 2012 even though Ned Colletti signed like ten infielders this offseason. And a big thanks to Alex and Valley Sports Cards. The event was awesome! And thanks to MVP Trading Cards Company for putting it all together. Also, it was nice hanging out and talking Dodgers with Ramon, Irene and Scott.
Share |
Posted by Dodgerbobble at 10:31 PM