Bobblehead of the Day: Manny Ramirez #1 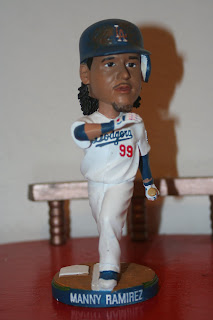 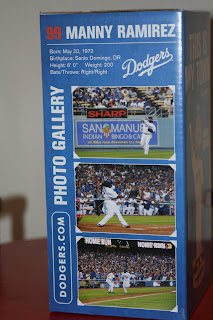 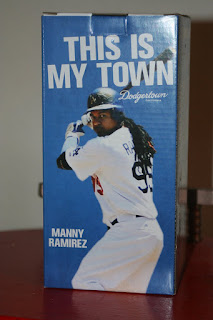 This may be one of the most famous bobblehead nights ever. July 22, 2009 the Dodgers gave away Manny Ramirez bobbleheads to the first 50,000 fans. Presented by San Manuel Indian Bingo & Casino, the bobble was made by P Squared.

When you get a players bobblehead, you want to see him play. Unfortunately, we had learned earlier that Manny wasn't going to play that night after getting hit in the hand in the previous game. The Dodgers had him as day to day.

Little did we know, he would pinch hit for Chad Billingsley in the sixth inning with the bases loaded and hit one of the most famous grand slams in Dodger history. The slam was even hit into "Mannywood" section. Amazing. He was then forced out of the dugout to acknowledge the crowd who had been chanting his name. The Dodgers went on to win the game 6-2.

This sparked a Manny Ramirez bobble frenzy on eBay later that night. It also gave the Dodgers a reason to have another Manny bobbleslam night later that year. But we'll get into that another time.
Share |
Posted by Dodgerbobble at 7:26 PM

0 comments
Labels: Bobblehead of the Day

Bobblehead of the Day 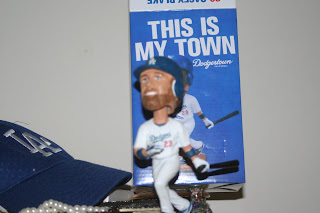 I'm gonna try to share as many of my bobbles as possible. I have over 200 now and the collection continues to grow.
Share |
Posted by Dodgerbobble at 7:19 AM 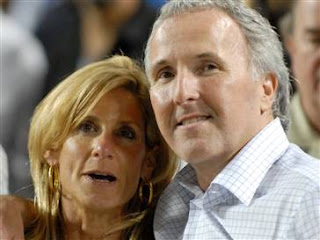 We've got a date.

The trial to determine who owns the Dodgers will start Aug. 30, writes Bill Shaikin of the Los Angeles Times. Los Angeles Superior Court Commissioner Scott Gordon has selected 11 days for the trial over the course of a month. Frank and Jamie are both expected to testify and attend every session.

I don't want to get into the McCourt divorce too much, but it's a reality that all Dodger fans are going to have to deal with. Now we know we'll be hearing about it all season long.
Share |
Posted by Dodgerbobble at 6:32 AM 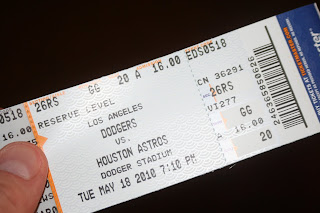 I recieved my Dodger tickets this week, so I thought it would be a perfect time to post my first blog.

Opening Day is awsome, and I can't wait for Dodger Stadium's home opener. But, my favorite games are always the bobblehead giveaways. And that's what I'm gonna be writing about. My love of the Dodgers, baseball and bobbleheads.

The first bobblehead night is May 18. The Dodgers will be giving away Andre Ethier bobbles to the first 50,000 fans. 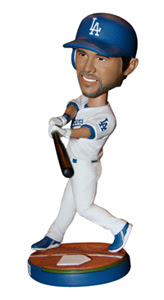 So, enjoy the blog, feel free to comment, and Go Dodgers!
Share |
Posted by Dodgerbobble at 7:47 PM

I really liked Eric Stults. He was always a very reliable pitcher for the Dodgers. I hope he finds success in Japan.
Share |
Posted by Dodgerbobble at 6:45 PM