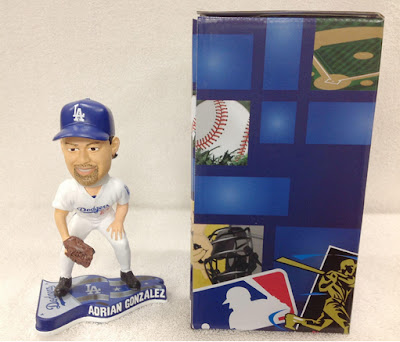 When Adrian Gonzalez became a Dodger last year, I couldn't wait for him to get a bobblehead. Now he's finally got one. BobblesGalore.com just released AGon's first ever Dodger bobblehead.

Limited to just 2,013, this Legends of the Diamonds bobblehead has a goatee'd Adrian in a defensive pose sitting atop a Dodger pennant base. Regular price is $39.95, but it's on sale now for $24.95. You can pick one up by clicking here. And don't forget to check out all the bobbleheads at BobblesGalore.com. 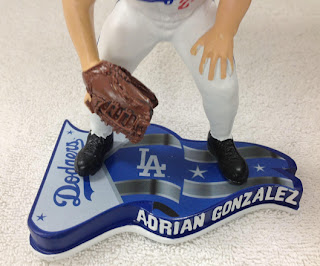 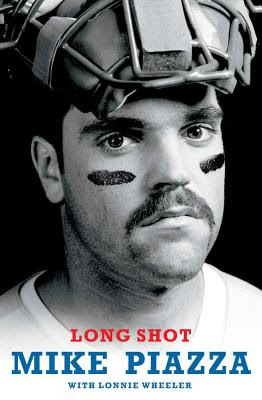 Former Dodger Mike Piazza's new book, "Long Shot" hit bookstores and Amazon nationwide today, but New Yorkers got a chance to pick it up one day early. As a matter of fact, Mr. Piazza was on hand at the Barnes & Noble in Manhattan Monday signing copies of his memoir. Hundreds of fans lined up in crappy NY weather to meet the catching great. One of those in line was my younger sister Karen, who was nice enough to pick up a signed copy for me.

When she arrived at B&N, her and another lady were told no more books were available. Luckily that women raised hell and they let her and my sister buy a book, making them the very last two in line. Like most book signings, no outside items were allowed and there was no personalizing or pictures with Mike. 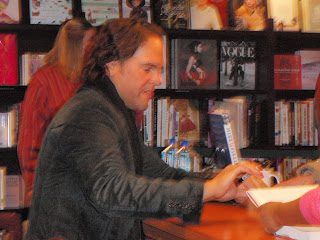 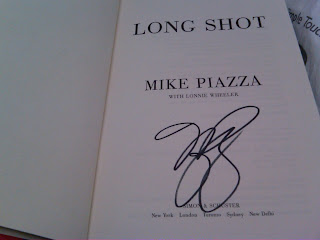 I wanted to say thanks Karen for picking this up for me. I really appreciate it. Even though I didn't get to meet one of my favorite Dodgers of all-time, I'm still happy to add this to the autograph collection.
Share |
Posted by Dodgerbobble at 9:29 PM 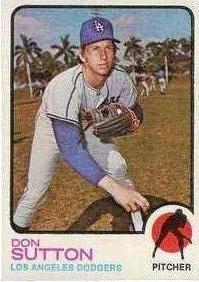