It's late in the day, but I want to wish everyone a merry Christmas. I hope you all had a nice holiday and got everything you wanted. I got a few new Dodger items and autographs from Santa this year. I also got myself a gift last weekend, a Dodger bobblehead mini plan for 2013. I picked it up at the second to last stop of the Dodger Holiday Mall Tour at the Westfield Shopping Center in Valencia. I was there on Saturday, December 15 to meet Dodger utility man Nick Punto, who was scheduled to meet fans and sign autograph from Noon to 2:00. 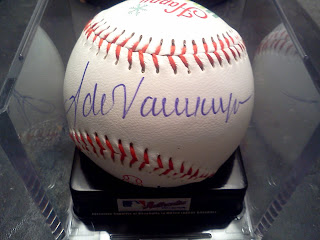 I arrived at the mall about an hour before Punto was scheduled to appear. There weren't many people there and the Dodger ticket reps were setting up for the event. While waiting in line, I decided to pick up my mini plan. If you signed up for any ticket plan, you received a gift bag from the Dodgers, which was a duffel bag full of swag including a Don Mattingly bobblehead, a fleece blanket and a Dodger holiday ball signed by Fernando Valenzuela. It's on a cheapo China ball, but I'll take the Fernando auto!

After I got my ticket plan, I jumped back in line. It was almost 12 o'clock and Nick wasn't there. Finally Noon, still no Nick. The line was getting longer, more time kept passing  and still no Nick. We were joking in line that maybe he was designated for assignment. At 12:45 Nick finally arrived. Apparently he went to the wrong mall. But he started signing as soon as he got there. It was one auto per person, so I got a baseball signed then jumped back in line and got a picture signed the second time around. 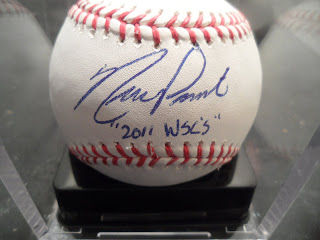 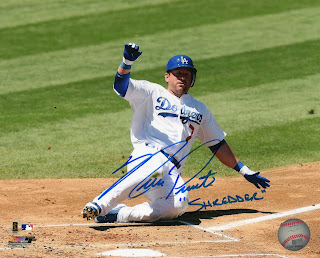 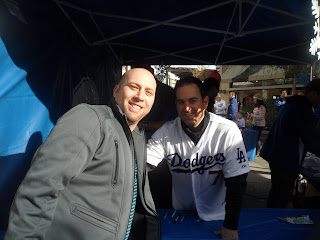 Thanks to Nick Punto and the Dodgers for putting on a great event and hosting this Holiday tour. Although I only made it to two of the Holiday Mall Tour stops, I was still very happy to get baseball autographs in the offseason. I've gotta give the Dodgers credit too, this was a great idea, getting the fans interested in the upcoming season and giving them incentives for buying tickets in November and December. I hope they do this again next year!

On Sunday, December 2, I planned on taking my kids down to the 2012 LA Auto show. This has been an annual trip for us and we were looking forward to seeing all the new cars. This year's show was held from November 30 through December 9. I was able to make it down to the Convention Center a few days earlier to meet Clippers Forward Blake Griffin and this second trip was to to see the cars.

While we were getting ready to go down to the Convention Center, I got a tip that Andre Ethier would be making an appearance that afternoon at the State Farm Insurance booth. I was heading down there anyway, so I might as well get an auto from Dre. I packed up a few items I needed signed and we headed downtown. 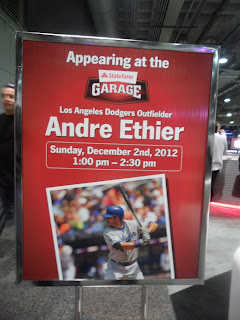 When we arrived, there were only three other people waiting for Ethier! I figured since there were so few people they would let us get outside items signed. Unfortunately that wasn't the case. Just minutes before Ethier came out we were told he would only be signing the provided State Farm 8x10 pictures. Although I was a little disappointed I wasn't going to get my items signed,  I'm also not one to turn down an auto. The picture they provided wasn't too bad anyway. 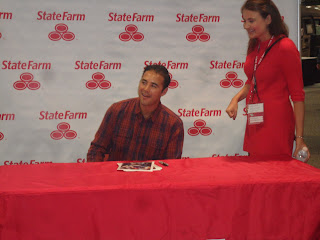 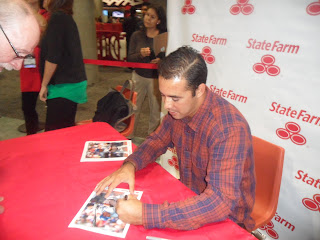 Andre was scheduled to appear from 1:00 to 2:30 and he showed up right on time, signing right away and even taking pictures with people. After we all got our autos, we decided to head to the convention. There were probably thirty people in line at that point and we could have easily gone back for more, but seriously, how many Ethier State Farm 8x10s do I need? Plus, my kids were really impatient and fidgety and wanted to get to the cars.

Although this year's Auto Show had less athlete and celebrity appearances than in previous years, it was still nice to get autographs from two of LA's bigger sports stars. Plus, the show itself is always a good time. Thanks to Andre Ethier and State Farm Insurance for the autographs and the nice meet & greet.
Share |
Posted by Dodgerbobble at 5:52 PM

I took a trip down to Frank & Sons last Saturday with Spiegel and Franz. I was there to get Tommy John's and Lee Lacy's autographs and pick up a few other things. 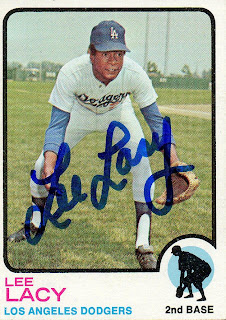 When we arrived, Lacy was signing autographs for free. I've got his autograph numerous times at Dodger Stadium, but I still needed to get his 1973 Topps rookie card signed, so I got that done.

There were still a couple of hours to kill before TJ signed, so we took a stroll around F&S. Someone was selling the Chick Hearn and Kareem Abdul Jabbar bobbleheads the Lakers gave away this year, so I picked up both. I'll do full posts on both bobbleheads in the future. 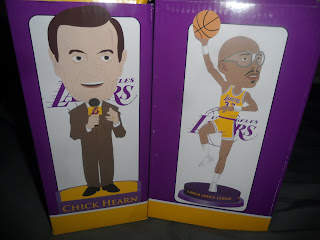 After picking up a couple other items at the show, we headed over to the autograph line. Pete Rose was there signing at the same time. I was tempted to get Rose as well, but passed because I've got him before and I needed to get home pretty quickly.

When we got to TJ's table, I got my baseball signed, took some pictures and put my camera away. Then Tommy made a comment on Franz's Mike Piazza T-shirt, they chatted for a minute or two, then he asked me to take my camera out of my pocket so he could take some pictures with Franz and myself. I've never had an athlete ask to take pictures before, so I was bit shocked. 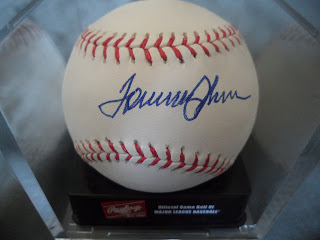 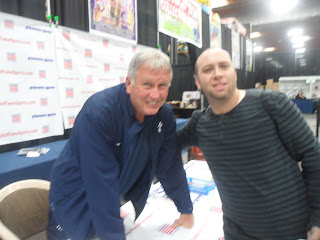 As usual, I had a great time at Frank & Sons. Not only did I get to meet the legend Tommy John, I also got to see a lot of people I hadn't seen since the baseball season ended, so it was nice catching up.
Share |
Posted by Dodgerbobble at 12:07 PM 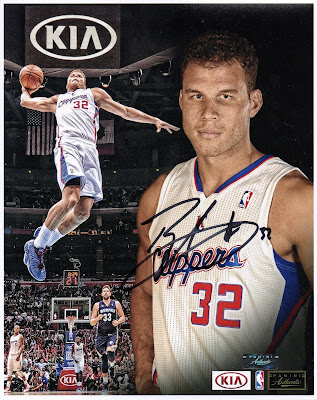 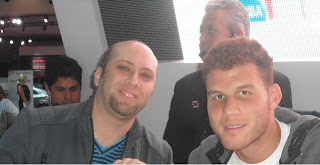 On Tuesday, the Dodgers announced that Hideo Nomo will be bobblehead number eight in 2013. We now know who 9 of the ten bobbles will be next year. Bobblehead #4 is the only one yet to be announced.

A bobblehead of Hideo Nomo has been added to the Dodgers' 2013 promotional calendar, the club announced Tuesday.

The bobblehead of Nomo, the eighth in next season's series, will be available Aug. 10 in an Interleague game against the Tampa Bay Rays. The first 50,000 fans will receive one. Nomo is scheduled to attend and participate in a pregame ceremony.

Nomo was a trailblazer for the influx of Japanese stars that have followed him to the Major Leagues. He arrived in 1995, when he won the National League Rookie of the Year Award and was an All-Star. In seven seasons with the Dodgers, he was 81-66 with a 3.74 ERA and threw the 10th no-hitter in Los Angeles Dodgers history in 1996 at Coors Field. It was the last no-hitter thrown by a Dodger.

Giving Nomo a bobblehead caught me a little off guard. I honestly never expected this, but I really like the decision.  It's been 11 years since Nomo's last bobble and I think he deserves a second. Last year Eric Karros got one and I think the other three 90's Rookie of the Year recipients deserve bobbles as well.  Maybe Raul Mondesi, Todd Hollandsworth and Mike Piazza can get one in 2014.