Bobblehead Of The Day: Chick Hearn 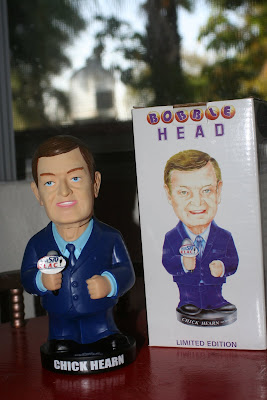 Yeah, I know this blog is called "dodgerbobble", but I also collect other bobbleheads besides Dodgers.

With the LA Lakers taking on the Oklahoma City Thunder today in the first game of their playoff series, it got me thinking about Chick Hearn. As a Dodger fan, I still have the pleasure of listening to Vin Scully call games. I used to feel the same way listening to Chick Hearn call Laker games. When Chick passed away, it was hard to watch those Laker games the same way.

On May 12, 2002, just three months before he passed away, 570 KLAC AM gave away 5,000 Chick Hearn bobbleheads as promotion for their 25th anniversary. 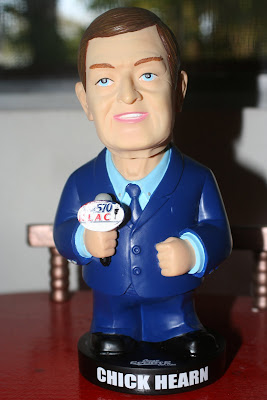 The box gives Chick's broadcasting history on one side and some "Chick-isms" on the other. Some of the Chick-isms include "building a house" and "the mustard's off the hot dog". It also gives us the most famous of all Chick-isms, "The game's in the refrigerator. The doors closed, the lights are out, the eggs are cooling, the butter's getting hard, and the jello's jiggling".

A statue of Chick Hearn will be unveiled next week in front of Staples Center prior to Game 2 of the Laker's first-round playoff series.
Share |
Posted by Dodgerbobble at 8:37 AM