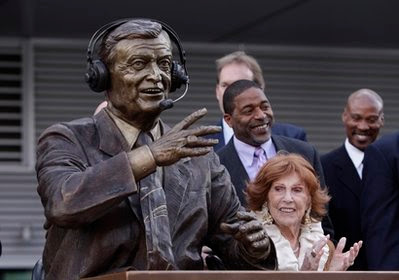 The Los Angeles Lakers unveiled a bronze statue of their late play-by-play announcer Chick Hearn today before Game 2 of their playoff series with the Oklahoma City Thunder.

Chick's wife, Marge, was there for the unveiling today. Former Lakers Byron Scott, James Worthy and Kareem Abdul-Jabbar were there as well as General Manager Mitch Kupchak.

This is something that was long overdue. Chick Hearn may be one of the greatest sports broadcasters of all time. He made watching games a pleasure. Laker fans miss you Chicky Baby.
Share |
Posted by Dodgerbobble at 7:11 PM