A Day At The Ballpark

What an amazing day. It felt good to be at Dodger Stadium again. I went with my wife, and we met our buddy Albert and his girlfriend there. Driving up to the stadium we saw hundreds of Dodger fans at the parks. This caused bumper to bumper traffic that was worse than usual. It took 40 minutes to get from the Stadium Way exit to Dodger Stadium.

Once we got there, we met our friends and waited for Adriana Urzua, who is the Coordinator of Player Development for the Dodgers. While waiting for her, we saw Larry King and Tommy Lasorda. 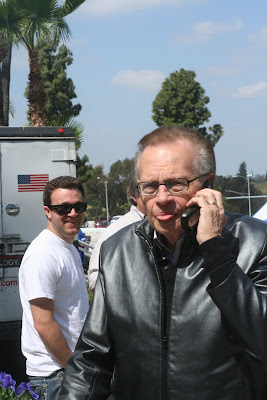 Adriana finally arrived. She gave us all a tour of the Dodgers front office. We met a lot of the great people working there. It was great to see what happens behind the scenes at Dodger Stadium. It was a very busy day, and the people there were still very friendly. One of the nicest people I met was Assistant General Manager Kim Ng. I got to see her office and chat with her for a minute. She's got a nice bobblehead collection too that she told me she had just put up for display the day before. 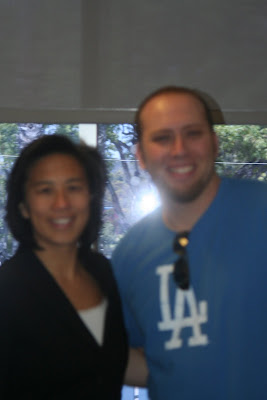 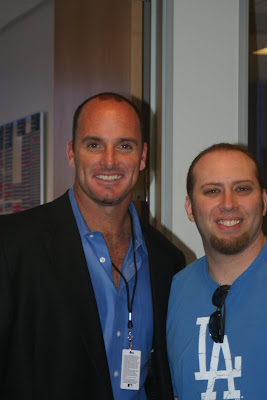 On our way out we got a couple of great surprises. First we ran into Tommy Lasorda, who was very nice. I was real nervous at that point. I couldn't even ask Tommy for a picture. Luckily, Adriana did it for me. 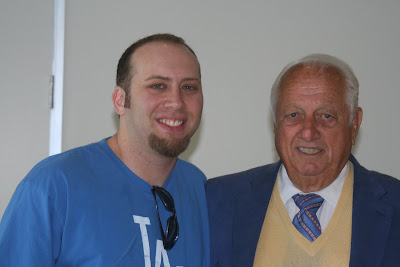 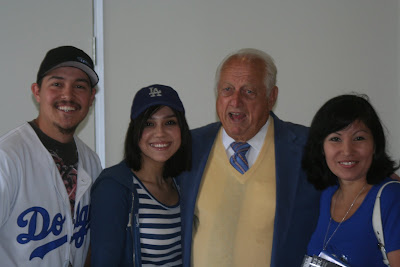 After meeting Tommy we ran into Ned Colletti. Now, I must say, Ned seemed a bit rushed(I don't understand why).But he did make the time for a picture. Thanks Ned! 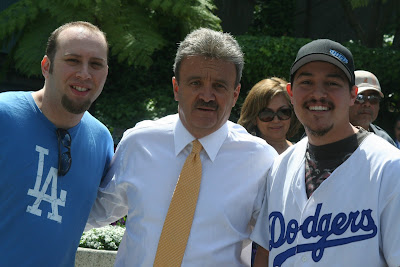 After meeting Mr. Colletti, we were on our way to our seats in Loge section 162. Everything was great from the get go. The whole opening ceremony was great. LeAnn Rimes singing of the National Anthem was good. Members of the military brought out a giant American flag to the outfield. 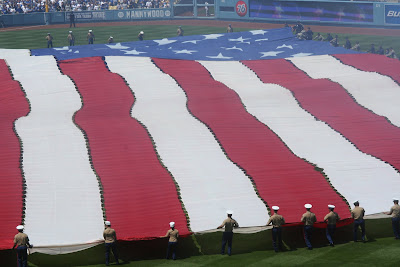 Will i am's ceremonial first pitch to James Loney was next. He made a pretty good toss to the Dodger's first baseman.

The game was amazing. Manny, Kemp, Ethier and Casey Blake all homered today. After Manny's homerun, the fans chanted his name, and a few moments later he climbed the dugout steps and waved to the crowd for a curtain call.

Clayton Kershaw also had a good opening day, going 5 1/3 innings, striking out seven D-Backs, and getting his first win of the season.

I had a great time at Dodger Stadium. It was my first Opening Day and I'll never forget it. I want to thank my buddy Albert and Adriana Urzua for everything they did today.
Share |
Posted by Dodgerbobble at 6:02 PM