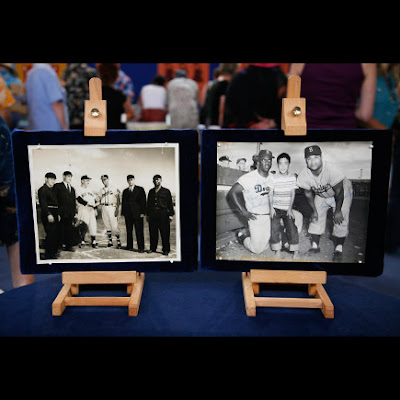 Antiques Roadshow is one of my favorite shows on TV. My wife and I love to see all the different treasures that are displayed and appraised. When people find out they have a valuable item, the look on their face is priceless.

On January 19, 2009 PBS aired a show that had been taped in Palm Springs and featured a collection of black and white pictures of Jackie Robinson and Roy Campanella. The pictures were autographed by both Brooklyn Dodgers and appraised at $6,000 - $10,000. 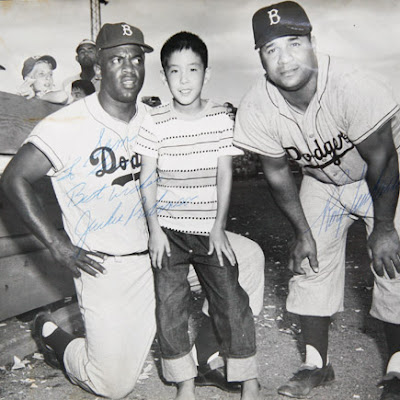 GUEST: That's my father, and he was a baseball umpire and he still umpires at the age of 90.

GUEST: He started in 1946, when he was, I guess, 31 years old. He did Major League games when the big league teams came to Hawaii.

APPRAISER: And how many teams came over the years?

APPRAISER: So the big names.

APPRAISER: And you would occasionally go to the games.

GUEST: I would always go to the games.

APPRAISER: You would always go to the games. Which leads us to our second photo. Now, this had to be a special day for you. This is you in the center, right?

APPRAISER: Jackie Robinson-- by the way, giving you a very weird look here. Were you giving him a pinch?

GUEST: I think he's giving Campy a weird look. Ah, and then Roy Campanella on the other side.

APPRAISER: What's your memory of this day? Well, my father said, "Meet me near the dugout before the game." And so I showed up and he opened the gate, called me in and he said, "I want my boy to sit right here," and it was right next to Jackie Robinson.

APPRAISER: What were you thinking?

GUEST: I remember thinking, "God, does he have big biceps!"

APPRAISER: What was he like? Did he talk to you?

GUEST: He didn't talk to me much, but it must have been a drag for him to have a ten-year-old kid sitting next to him the whole game. But he did give me his bat.

APPRAISER: And that, unfortunately, your parents threw away. I can't believe it. They made a terrible mistake.

GUEST: They made a terrible...

APPRAISER: But they didn't make a mistake here about getting a photo. You and Campy and Robinson, together. And this was 1956?

APPRAISER: Well, this is a great personal memory to you, but it's also a spectacular piece of baseball history. Here you have the two trailblazers of integration-- Jackie Robinson, who joined the Dodgers in '47; Campy followed him a year later. You know they were among the first two African-American ballplayers to make the All-Star team in '49, with Don Newcombe and Larry Doby. Campanella went on to win three MVP trophies.

APPRAISER: Robinson won one in '49, and of course, the pinnacle of their careers, they defined the Brooklyn Dodgers in the 1950s and they won the World Series in 1955.

APPRAISER: Beating the Yankees, of course. Which leads us really into value. And it's kind of bittersweet here. This is the last trip that Jackie Robinson ever took with the Dodgers.

GUEST: I didn't know that.

GUEST: That I did not realize.

APPRAISER: Now, the second thing, it's rare to ever see them sign a photo together, and it has perfect provenance. We know the day it was taken. I would place a conservative auction estimate of $6,000 to $8,000 on the photo.

GUEST: I can't believe that.

GUEST: So even photographs in which I appear have some value?

APPRAISER: Well, their signatures were faked so much by their batboy, Charlie "The Brow" DiGiovanna, that to have something where you can prove that you were there and they signed it for you, it's provenance, it's authenticity.

GUEST: I don't think Charlie made the trip.

APPRAISER: I don't think Charlie made the trip either. But this is not only a fabulous personal piece, memento to you, but it's a great snapshot of history.