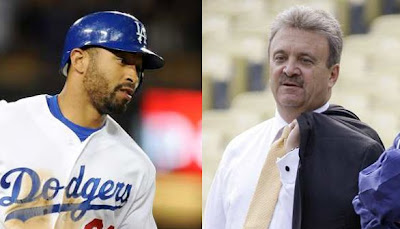 Yes, the Dodgers are a mess right now. There are problems with the offense, defense, and pitching. To blame one person for this mess would be stupid. Yesterday, Ned Colletti made some comments to Peter Tilden on 790 KABC about Matt Kemp. He said Kemp's defense and baserunning were below average and wondered aloud whether Kemp might be too comfortable now that he has a new two-year, $10.95 million contract.

"I told him I didn't single him out, the same thing I told [the media] earlier. We had a five-minute conversation."

Asked if it was a two-way conversation, Colletti said it was. Asked if everything was fine between him and Kemp, Colletti simply said, "It's fine with me."

He's not singling Kemp out? Huh?

Obviously, Ned's got a problem with the way Kemp has been playing. And maybe Ned's right. But that's not the way you go about things when you are the General Manager of a professional baseball team.

"What I would suggest for Ned Colletti to do is look at himself in the mirror. No player has called out Colletti for wasting tens of millions of dollars on Jason Schmidt or Andruw Jones, and that players deserved the same level of courtesy from their general manager."

"You have to look at the fact that Matt is a 25-year-old player. He's been very successful, but you cannot forget the fact that he's still learning to play the game. He's only played center field for two years. He's done everything the organization has asked him to do."

Stewart is right. Ned's made plenty of mistakes as GM.

Ned Colletti put this team together. He needs to take responsibility for the problems the Dodgers are having.

The Dodgers are finally coming home after a 2 and 7 road trip. Stringing some wins together at home is exactly what this team needs. In the end winning cures all.
Share |
Posted by Dodgerbobble at 9:02 PM