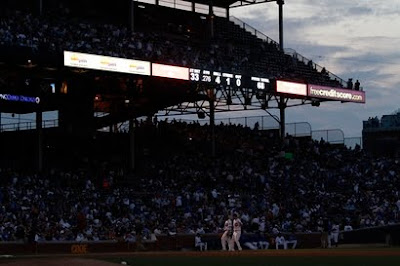 The Dodgers played the Cubs on what turned out to be a strange night in Chicago. In the fourth inning Cubs starter Tom Gorzelanny faced Dodgers 2B Blake DeWitt. DeWitt ended up walking. While watching DeWitt take his base, all of a sudden the television went black. Apparently, there was a power outage a few blocks away from Wrigley Field, and the electric company had to shut down the power grid.

The Cubs transferred the primary power service to the secondary service, but there was still an 18 minute delay.

The delay was awful. When the game came back on, there was still no video coverage. For what seemed like an eternity, we only heard Eric Collins call the game. And it sounded like he was calling the game from his cell phone. It was painful. I wanted to watch the game in the worst way.

I never realized how dependant I was on the television. I ended up using MLB Gameday At Bat to keep track of the game, but it wasn't the same.

Eventually the video came back and everything was better, although Wrigley still seemed dark.

Chad Billingsley got his fourth win in a row, as the Dodgers held on for the 8-5 victory . The win was great. The blackout sucked.

So, here's to video on the television set. May you never go black during Dodger games.
Share |
Posted by Dodgerbobble at 8:56 PM