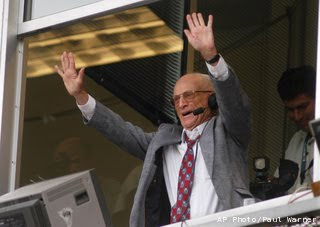 Hall of Fame broadcaster Ernie Harwell passed away Tuesday at age 92. Harwell called games for the Brooklyn Dodgers from 1948-1949. He would be replaced later by Vin Scully. Harwell spent more than 40 seasons calling Detroit Tigers games. He announced Detroit games on radio from 1960 to 1991, again in 1993 and from 1999 to 2002. He broadcast games on over-the-air and cable television from 1960-64 and 1994-98. He had been scheduled to receive the Vin Scully Lifetime Achievement Award in Sports Broadcasting in New York on Wednesday. He will be missed by many.


Vin Scully shared some of his memories of the legendary broadcaster with ESPNLosAngeles.com's Tony Jackson. Here's what he had to say:

• "Ernie Harwell, I don't know if any of you know it, set a record before he ever came to the major leagues. In 1948, the Brooklyn Dodgers were in Pittsburgh. It was an off-day, and Red Barber was playing golf at the Pittsburgh Field Club. He was at a place on the golf course that was close to the clubhouse, and he felt very nauseous. He was wearing a coconut straw hat. He took it off and ran to the clubhouse and upchucked, only blood. He had a bleeding ulcer, so they flew him to New York immediately. Branch Rickey was running the Brooklyn Dodgers at the time. Arthur Mann was running the Atlanta Crackers. Branch called Arthur, because they knew each other very well, and he said, 'I need your announcer.' And Arthur said, 'Well, I need a catcher.' So Clint Dapper was sent to Atlanta, and Ernie Harwell came to Brooklyn. It was the only trade that ever involved an announcer."

• "He was with the Dodgers in '48 and '49, then I sat in his chair. I didn't follow or succeed him, I just sat in his chair. He was so gracious and kind. Probably the best word is that he was a gentleman, and it came across. He just cared for people. He loved baseball. He was such a nice guy, so you can understand why the people of Detroit just loved him."

• "I can't remember the year, but there was a game where the Dodgers turned a triple play against Atlanta in Atlanta. I had never seen the Dodgers turn a triple play. Ernie Harwell was sitting on the other side of a glass partition from me, and he had called the other Dodgers triple play in 1949. So l leaned back and asked him about it. I'm thinking this is great, both of us right there together. But he just said in that perfect Southern way, he said, 'Vinny, I don't rightly remember.' And that put in perspective, to show that it was one moment, now let's get on with it."

Click on Vin to hear what he had to say: 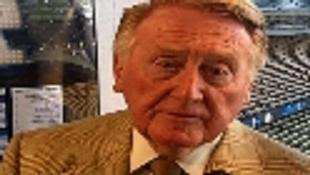