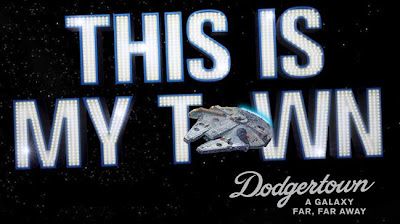 Celebrating the 30th anniversary of the fan-favorite Star Wars™ installment, Dodger Stadium will host the Empire Strikes Back night on May 21
Themed My Town section will incude character appearances, giveaways and more


The Dodgers will celebrate the 30th Anniversary of Star Wars: Episode V The Empire Strikes Back on May 21 - three decades from the day the classic trilogy's beloved middle chapter first debuted in theaters. Fans can sit in a special My Town Section - dubbed "Dodgertown, A Galaxy Far Far Away" - when the Dodgers play against Detroit at 7:10 p.m. The first 20,000 fans in attendance will also receive a numbered, limited edition, foil-stamped 30th Anniversary poster featuring iconic Empire images coupled with a custom version of the Dodgers "This is My Town" logo.

Inter-galactic festivities will begin before the game with appearances by classic Star Wars characters - including Stormtroopers, Yoda, R2-D2 and more - who will take photos with fans in Autograph Alley. Chewbacca the Wookiee will throw the ceremonial first pitch - launching an evening of Star Wars-themed in-game entertainment.

"Dodgertown, A Galaxy Far Far Away" will be located in the Lower Reserve sections 56 - 60. All fans sitting in this section will receive the free "Dodgertown, A Galaxy Far Far Away" T-shirt with the iconic image of infamous bounty hunter Boba Fett. Fans in this section will also enjoy unlimited ballpark favorites such as Dodger dogs, nachos, peanuts, popcorn and soft drinks, as well as a special Star Wars-themed menu -- such as Boba Burgers, Darth Tater Chips and Ice Sabers.

Last season's My Town section, Dodgertown, Star Wars: The Clone Wars, sold out. Group tickets for the "Dodgertown, A Galaxy Far Far Away" section are $37 and individual seats are $45. Both can be purchased at www.dodgers.com/starwars or by calling 1-866-DODGERS.

Labels: Empire Strikes Back, My Town