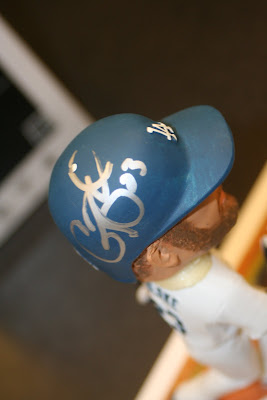 Casey Blake was signing autographs in Pasadena today. John Ely was signing in Culver City. And Jonathan Broxton in Pomona. Jacksonville Jaguars Running Back Maurice Jones Drew was also signing in El Segundo. My goal was to get to at least two of these events. I decided that the trip to Pomona to see Broxton was out of the way. So, my plan was to go to Pasadena first, then Culver City, and if there was time, El Segundo. 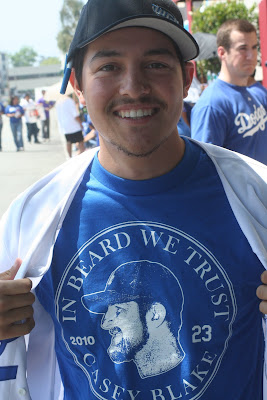 I went with my buddy Tom. The event was to start at 12:00. We got to Pasadena at 10:30 and there must have been a 500 or 600 people in line already. Luckily, we ran into our buddys Albert and Chris who were at the front of the line. Albert was wearing an "In Beard We Trust" t-shirt from thelfp.com. I've been meaning to order one of those shirts. I'll get around to it soon. Anyways, there were others walking around with the same shirts.We saw Dodger photographer Jon Soo Hoo there. People were very excited to meet "The Beard". 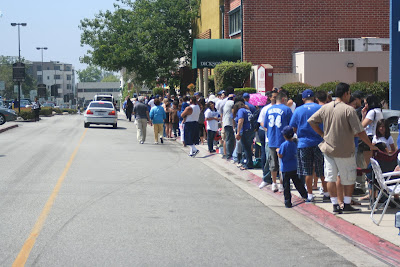 Wrist bands were handed out at around 11:30. Security told us that Casey didn't want any pictures taken, and that he would only sign one item. That was kind of a bummer. But, I understand why, there must have been 2,000 people there by 12:00. And that's when they started letting people in. Things moved pretty fast from there. The Verizon employees entertained us in line with games and prizes.

It was very hot outside, so once we got indoors, it was very relieving. They rushed us through. I got Casey to sign my bobblehead(what else would I have him sign?). Albert and Tom got baseballs signed. Chris had him sign a picture. Albert got him to sign the baseball "Casey The Beard Blake". 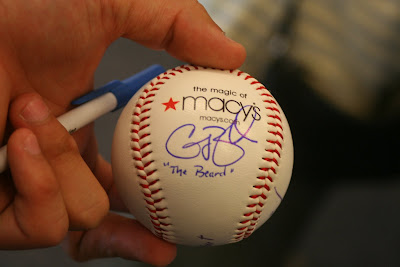 We all rushed out of there. It was 12:30. Tom and I thought we'd try to get to Culver City to meet Ely before 1:00, when the event was supposed to end. A half an hour to get to Culver City from Pasadena? No problem, right? WRONG. It took 40 minutes just to get to the National exit on the 10 freeway. So, we missed that opportunity. Let's try going to El Segundo for MJD. It took another 30 minutes from there. We got to Dick's Sporting Goods at 12:40, twenty minutes before the event ended. We stood in line for those twenty minutes. There were about 100 people in front of us. MJD stopped signing at 2:00 on the dot. Everyone standing in line was handed a picture of the Jaguars running back and sent on their way. That was a waste of time.

In the end, we went 1 for 3 in autograph attempts. In baseball, that would be a good day. For us, it was terrible. Plus, I have a sunburn.
Share |
Posted by Dodgerbobble at 8:04 PM