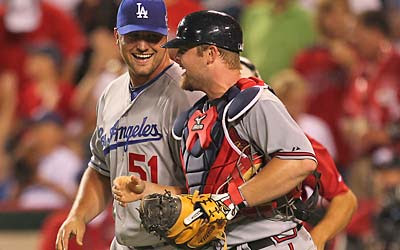 After 13 straight All-Star Game losses to the American League, the National League finally get's a win at the Midsummer Classic.  A three-run double from Braves catcher Brian McCann in the seventh inning gave the NL the lead. And that was all they would need, as they went on to win 3-1.

Four Dodgers made the NL team, Andre Ethier, Jonathan Broxton, Rafael Furcal and Hong-Chih Kuo. Let's see how they did.

Andre Ethier went 1 for 2  with a single in the fifth inning off of Justin Verlander. Rafael Furcal walked in his only at bat. Hong-Chih Kuo gave up one unearned run, the only American League run. And Jonathan Broxton finished the game, striking out one and earning the save. Not bad at all.

The National League now has home field advantage in the World Series. I hate this rule, but that's just the way it is. Hopefully, the Dodgers make it that far.
Share |
Posted by Dodgerbobble at 10:50 PM