Bobblehead of the Day: Manny Ramirez #2, The Curtain Call Bobblehead

Now that Manny Ramirez has been traded to the Chicago White Sox, I probably won't get too many more opportunities to talk about his bobbleheads.

I've already posted Manny's first Dodger bobblehead, the one given away on July 22, 2009. That night, Manny wasn't in the starting line-up because of his sore left hand. With the score tied 2-2 and the bases loaded in the bottom of the sixth inning, starting pitcher Chad Billingsley was removed for a pinch-hitter. That pinch-hitter was Manny. With the crowd chanting his name, he came up to the plate and crushed the first pitch he saw  into the "Mannywood" section in left field. A grand slam on his bobblehead night. It was dubbed the "BobbleSlam" game.

Dodger Stadium was going crazy. The fans wanted a curtain call.  Manny was forced out of the dugout to acknowledge the crowd. He walked up the dugout steps and raised his pine tar-covered helmet to the fans. This was the inspiration for the fourth and final bobblehead given away in 2009, the Manny Ramirez "Curtain Call" bobblehead.

On September 16, 2009 the Dodgers gave away Manny Ramirez "Curtain Call" bobbleheads to the first 50,000 fans in attendance. Presented by San Manuel Indian Bingo & Casino, the bobble was made by P Squared Promotions. This was the fourth and final bobblehead given away that season. The other three were Casey Blake(5/20) Manny Ramirez #1(7/22) and Matt Kemp(8/19).

The Dodgers played the Pittsburgh Pirates that day. It was a day game that started at 12:10. Hiroki Kuroda was the starting pitcher for the Dodgers, Kevin Hart for the Pirates. The Dodgers won the game 3-1, with Kuroda getting the win and Jonathan Broxton the save.

Let's take a look at the Curtain Call Bobblehead: 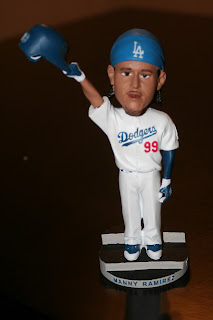 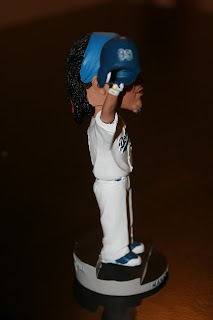 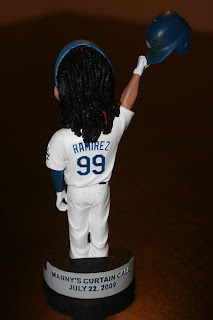 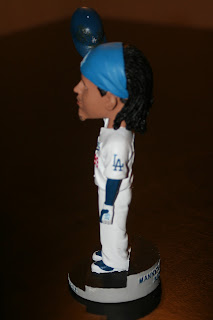 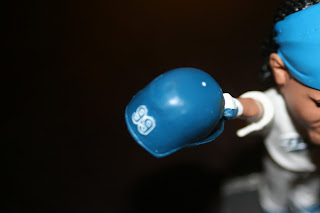 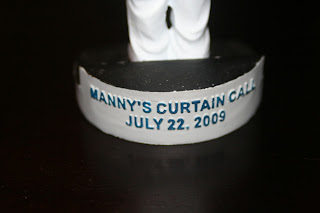 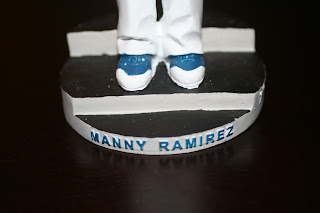 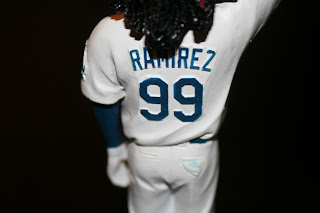 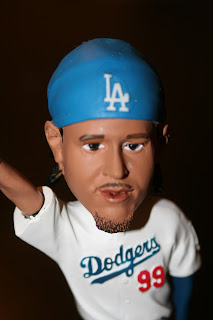 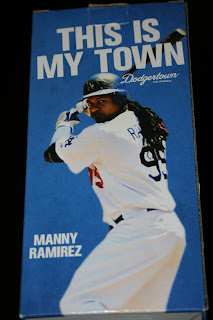 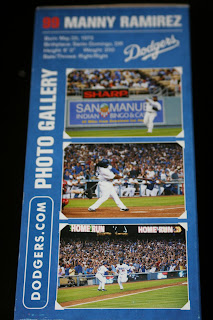 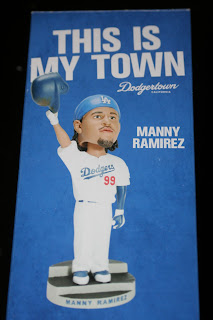 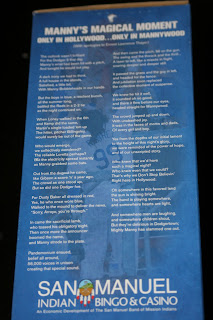 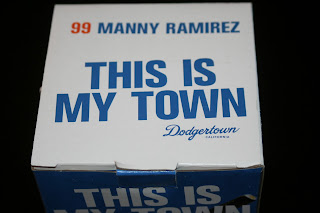 There are so many different opinions on Manny Ramirez. Some Dodger fans loved him, some hated him. I for one loved what Manny did here in LA. Yes, I was upset when he was suspended 50 game for using PEDs. But there were plenty of great times too.

I remember how excited I was when I found out Manny was coming to Los Angeles. There was finally a superstar playing in Hollywood. After coming to the Dodgers, Manny had two of the greatest months ever, hitting .396 with 17 home run and 53 RBI. He led the Dodgers to an NL West title and NLDS sweep over the Chicago Cubs, the Dodgers first playoff series win since 1988. The Dodgers would eventually lose the National League Championship Series to the Philadelphia Phillies in five games. In the 2008 playoffs, Manny hit .520 with 4 home runs, 2 doubles, 11 walks and 10 RBI.

Manny started 2009 blazing hot. Through May 6, he was batting .348 with six homers and 20 RBIs in the first 27 games. Then news broke that Manny had been suspended for 50 games for using PEDs. Manny wouldn't be back in Dodger blue until Fourth of July weekend. The Dodgers were in San Diego that weekend playing the Padres. Thousands of Dodger fans made the trip down to Petco to see the game. That's how much love Dodger fans had for Manny. Later that month we would get the bobbleslam game, a game I won't ever forget.

If anything, Manny brought excitement to Los Angeles, something we hadn't seen in a long time. Maybe he'll do the same thing while in Chicago. Good luck Manny.
Share |
Posted by Dodgerbobble at 5:39 AM