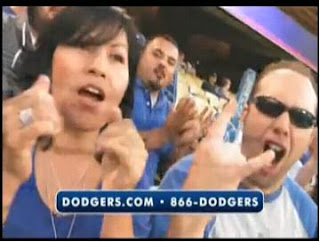 On August 3, I was one of 20 Dodger fans who got to shoot a commercial at Dodger Stadium. I had the opportunity to do this after winning a Twitter Tuesday contest held by @DodgertownUSA.  I was able to bring someone with me, so I took my wife. We had so much fun making the commercial. They had us do different things like the wave and cheering. They also gave us different Dodger promos to use like bobbleheads and cooler bags, so we figured we might be in multiple commercials. We were right. I've already seen myself in a two Dodger commercials.

The first commercial I was in was for the All-New Coke Family Four Pack that included four bobbleheads. That one is still playing. The second one I'm in details what's taking place at Dodger Stadium from August 20-22. Check it out:

It was pretty exciting seeing myself in a Dodger commercial. I'd love to do something like this again someday.
Share |
Posted by Dodgerbobble at 1:41 AM