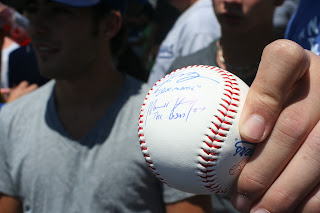 A couple of weeks ago, I heard that Dodger shortstop Rafael Furcal would be making an appearance at the Verizon Wireless store in the City of Commerce on Saturday, August 21 from 12:00-1:00. I was pretty excited about going to the event and getting my Rafa bobblehead signed.

Well, Friday night, the Dodgers announced that Furcal had canceled, and that Matt Kemp would be taking his place at the event. I was happy to meet Furcal,  but once I found out my favorite player would be there instead, I got real excited.

So, I got my 2009 Matt Kemp bobblehead, and drove down to Commerce. I left late, and I knew it was gonna be crazy. My friends Albert and Chris and Linda were already down there holding a spot. They got there four hours early and were over 300 people back. I knew there was a good chance I wouldn't get to meet Matt, but I decided to at least give it a shot. So I waited it out. 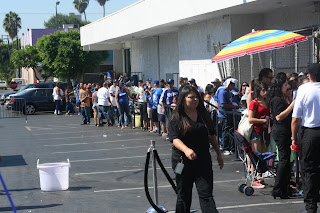 There were two lines to meet Kemp. The first was the regular line that we were in. The second was a VIP line. Anyone who made a purchase in the Verizon Store was moved into the VIP line, and would meet Kemp first. Albert and Linda made purchases, so they went right to the VIP line.  Chris and I waited with the rest of the crowd in the blistering heat.

Earlier, while walking up to meet my friends, I bumped into Roberto from Vin Scully Is My Homeboy. It was nice to finally meet him in person.We chatted for a little bit. I've got to say, Roberto may be the most dedicated Dodger fan I've ever met. He was one of the first people in the line.

Kemp got there on time. The crowd went crazy. The line moved at a snails pace. Twenty minutes after Kemp started signing, Albert and Linda showed up with their signed baseballs. They told us that ten people were going in at a time, and that Matt was signing very slowly. I knew I wouldn't get the autograph. But I stuck with it.

While waiting, a woman fainted in line. The fire department showed up and took her away in an ambulance. It was very hot out there, and the line was moving slowly. 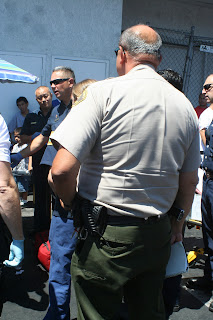 1:00 rolled around and I was still about 150 people back, and there were at least 200 more people behind me. At around 1:05, the crowd started to run towards the front of the store, and that's when I knew Matt was leaving. And I was right. No Matt Kemp autograph for me. He got into the back seat of an SUV, and they drove off. He waived out the window to the crowd, and that was it. Some people booed, but for the most part, it was very calm.

While walking back to the car, we ran into Dodgers photographer Jon Soo Hoo. He was nice enough to take some pictures with us. I am a fan of Soo Hoo's work, so it was it was a nice little surprise at the end of a long, hot, disappointing day.

Once again, I want to say that these player appearance need to be longer. There are fans standing in line for hours just to meet their favorite baseball players. One hour of signing is ridiculous, especially for a player as popular as Matt Kemp.
Share |
Posted by Dodgerbobble at 5:26 AM